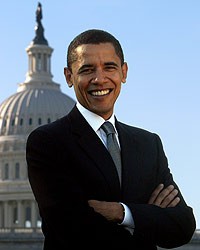 Today we launch TMPâ€™s â€œEye on Obamaâ€. Senator Barack Obama is one of the most exciting politicians to come out of the U.S. Democratic Party for many years.

Obama, who is of mixed race, is only the fifth African American Senator in U.S. history and is the sole African American currently serving in the U.S. Senate. He is still is his first term as one of the senators from Ilinois and has come out of nowhere to become a leading contender to become the Democratic Partyâ€™s candidate in next yearâ€™s U.S. presidential election. He first rose to prominence at the Democrats 2004 national convention where he gave a barnstorming speech which can be viewed here.

There are seven other contenders for the Democratic Partyâ€™s presidential nomination: former First Lady, Senator Hilary Clinton; former Senator Mike Gravel; Senator Chris Dodd; former Vice Presidential nominee John Edwards; Congressman Dennis Kucinich; Senator Joe Biden; and, Governor Bill Richardson of New Mexico. However Clinton and Obama have emerged as the clear front runners – a recent poll has Clinton on 39% and Obama on 24% – the nearest rival to them both is Edwards on 21%.

The primary season, during which the Democrats will vote for who they want to be their presidential nominee, runs from January to June 2008, followed by the presidential campaign proper after a nominee has emerged. Election day is Tuesday 4 November 2008.

45 year old Obama has already managed to raise almost the same amount of money for his campaign as Clinton has and he has over 70 people staffing his campaign full time. Regular updates on the progress of his campaign will appear on this site. In the meantime, you can find out more information about him from his official campaign website.