Eye on Obama: Barack talks private equity and energy ahead of London fundraiser

As U.K. Chancellor Alistair Darling announced the end of taper relief, a tax break aimed at entrepreneurs but exploited by private equity houses, Senator Barack Obama has slammed Washington law makers for failing to do the same over in the U.S. 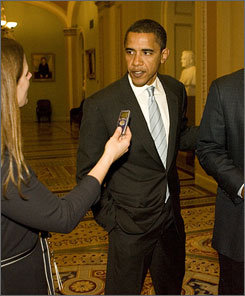 Yesterday he released the following statement on reports that Washington will fail to address the taxation of private equity firms:
“If there was ever a doubt that Washington lobbyists don’t actually represent real Americans, it’s the fact that they stopped leaders of both parties from requiring elite investment firms to pay their fair share of taxes, even as middle-class families struggle to pay theirs. When I’m President, the American people won’t have to spend record amounts on lobbying to get their voice heard in Washington. I will close tax loopholes for big corporations, provide 90% of working Americans with a tax cut, and pass the strongest lobbying reform in history.”

Obamaâ€™s statement follows reports that the U.S. Senate will not address the taxation of private equity firms after millions of dollars in industry lobbying.

Obama has also been busily outlining his plans to make America greener. Last week he announced a plan to make the U.S a global leader on energy. Obama pledged to provide real leadership on the issue by challenging conventional thinking and loosening the grip of special interests.

Obama’s plan lays out steps to combat global climate change, free the U.S. from the tyranny of oil, and create millions of new jobs and entire new industries. The plan includes:
â€¢ implementing an economy-wide cap-and-trade program to reduce greenhouse gas emissions to the level recommended by top scientists to avoid calamitous impacts;
â€¢ investing $150 billion over the next ten years to develop and deploy climate friendly energy supplies, protect manufacturing and create millions of new jobs;
â€¢ improving energy efficiency to reduce energy intensity of the economy by 50 percent by 2030;
â€¢ reducing dependence on foreign oil and reducing oil consumption overall by at least 35 percent, or 10 million barrels of oil, by 2030; and
â€¢ leading a new international global warming partnership.

The plans have been positively received with former U.S. Senator Gary Hart, Chairman, Council for a Liveable World saying that:
â€œBy identifying climate change and energy dependence as issues undermining U.S. national security, and by providing urgent and creative national policies to address these threats, Senator Obama has demonstrated personal courage and political leadership. He deserves great credit for both.”

Obama’s wife Michelle is scheduled to stop over in London on Monday for a campaign fundraiser.