Short: Baroness Amos has been sent to the Lisbon summit because she is black 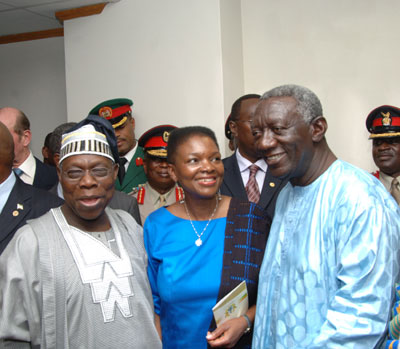 The independent MP and former Labour cabinet minister, Clare Short, has accused the Prime Minister of tokenism for sending Baroness Amos to the EU/Africa summit this weekend in his place. Today Short claimed that Amos (pictured above with former President Obasanjo of Nigeria and President Kufuor of Ghana in March this year), who will be attending as the UKâ€™s representative, is being sent because she is black.

Gordon Brown is boycotting the summit due to the presence of Zimbabwean dictator Robert Mugabe. Commenting on the Prime Ministerâ€™s decision, Foreign Secretary David Miliband MP said:
“It would have been absurd to sit there through a discussion on good governance and human rights and pretend there wasn’t absolute meltdown going on in Zimbabwe.â€

However, Clare Short, a former international development secretary, speaking on BBC Radio 4â€™s World at One programme, said of the decision to send Baroness Amos in Brownâ€™s place:
“I don’t see any reason to send a kind of pseudo minister and I think that it’s not right to send her because she’s black. I don’t see any other reason for sending her.”

Baroness Amos became the first black female to enter the cabinet in 2003 when she succeeded Short as international development secretary. Later that year she became leader of the lords, a position she held until June this year.

Before entering the cabinet Amos had served as Parliamentary Under-Secretary for Foreign & Commonwealth AffairsÂ from June 2001 with responsibility for Africa, the Commonwealth, the Caribbean, Overseas Territories, Consular Issues and FCO Personnel. Her experience in African affairs led the Prime Minister to nominate her to become the EUâ€™s ambassador to the African Union this year.

In light of Baroness Amosâ€™ experience, Shortâ€™s comments have provoked outrage in some quarters.Â  Labour sources have told TMP the comments are â€œoutrageousâ€ and that Amos is being sent on merit alone.

Miliband described the comments as insulting saying:
“[Baroness Amos] has got a lot of knowledge about Africa as a whole, not just about Zimbabwe, and I think she will be a very good advocate for the UK, but also for the sort of relationship between the EU and Africa we want to see.”

Letters of complaint can be sent to: Clare Short MP, House of Commons, London, SW1A 0AA; or, you can email using the form here.