Essay: Will I ever join the Labour Party?

TMP asked Ade Sawyerr what it would take to get him to join the Labour Party.Â  Here he explains what Gordon Brown will need to do to seduce him.

What would it take for me to join the Labour Party in the UK? Surprisingly, it would take a lot of persuasion from Gordon Brown the current leader; this is because I have not seen much difference between the policies of the Labour Party and those of the Conservative Party.

I came into Britain near the start of the Thatcher years, in between when I was accepted into business school and when I arrived here from Ghana, there had already been changes â€“ the fees for overseas students were doubled as soon as she came into power â€“ so I was quite ready for the rough ride of monetarism without a care for whether one was a member of the Commonwealth or from any other country without ties with the mother country.

I watched the Labour Party lose an election in 1983 when there were 3 million people unemployed in the country; their major concerns then were more about unilateral nuclear disarmament and whether black politicians in the Labour Party could or could not form their own sections. At that point I realised that the Labour Party was still playing the big paternalistic imperialist, something it still tries to do. So though I continued to vote for it, I did not join the Labour Party.

After Kinnock (right)Â took over he transformed the party and though he lost the election of 1987, he started making the party electorally viable. But it took the elections of 1992, after Margaret Thatcher had been thrown out by her own party in 1990, for the Labour Party to make a surge. John Major had supervised a Conservative Party that was tearing itself apart with concerns about Europe and was reeling under allegations of sleaze. But in the 1992 elections, Labour was too triumphantlist and the tax calculations of John Smith just did not add up.

So after the great work that Kinnock had done in modernising the party, kicking out the Militant Tendency and purging some of the loony left ideologies, he handed over smoothly to John Smith who made the party even more respectable.

After John Smith passed on we all expected that the senior partner in the Brown-Blair tag team (below) of high performers in parliament would have followed Smith. But Brown passed up that chance; some believe that he was outwitted by meddlesome Mandelson to allow Blair ascend to higher office as leader of the Labour Party.

Soon we had Emilyâ€™s list, all women shortlists, to increase the number of women in parliament but no such list for black candidates, I did not blink â€“ maybe the signs were there but I could not discern them. Blair led the party to a spectacular election victory in 1997 â€“ there was so much excitement; the party of the masses had come into power and the politics for the working class back in fashion.

I did not worry too much that they were taxing the super rich corporations to pay for the National Health Service or that they had given the Bank of England its independence. I was actually impressed that they had promised the country fiscal prudence and that the economy would be left to grow at a faster pace than the Conservative Party had left it.

I even laughed off their desire to turn this country â€œcoolâ€, in line with their modern agenda and their decision to pump some much needed money into the health service. I was ecstatic that they dared to put through the proposals for the minimum wage and less so that they screwed single mothers for the little that the state provided. Elections are won at the centre, so it is all right to ensure that the middle class stays the course with you.

No politician or political party wants poverty in their country but what they do to tackle and eradicate poverty is as important as the outcome. Labour under Blair could not deliver on poverty, Labour under Blair could not deliver on housing and – though they claimed that they were for education – they did not solve the problem of inner city schools, keeping on the same Tory policies. What astonished some of us was that it was alright for their children to attend better schools whilst they did nothing about the reasons why they had appealed to a lot of people to sort out the educational system once and for all.

After two election victories, Labour became arrogant and Labour replaced spin with the truth. They were still a competent bunch but corruption started rearing its ugly head.

When Blair started the Africa Commission and talked about cancellation of Third World debt, one thought that all this talk was genuine, but I still cannot fathom why the Blair government got on the wrong side of Mugabe and primarily, because of that dispute, have allowed Mugabe to brutalise his own people. I cannot believe the failed promises to resolve the Israeli/Palestinian conflict and the shameful behaviour in not intervening earlier in the Hezbollah Israeli dispute two years ago

But, after all the good that Blair did for this country, Iraq was a venture too far for me. The posturing was disgusting, the lies were obvious from the start and we all knew that not only was this an unjustified war, it was a bad war and for Blair to have gone into it despite the huge public outcry against the war turned him into a tyrant in a civilised country â€“ he lost the moral high ground and with it the respect I had for him. After the lies of Iraq, Blair had to go and he went.

With Brown in the driving seat there was some hope that things would settle down to normality, that the steady hand that has overseen the stability of the economy would come in with solid policies meant for the upliftment of the working classes in this country. The substance to date has been lacking, though I must confess that these are trying times for capitalists all over the world and Brown has just been caught in the middle of it all. I even forgive the non election – we were not sure that he could carry it through, since some of us felt the shine had worn off the labour election machinery after Blair left.

Brown needs to abandon spin – it will only serve to undermine his government. We can all take a little bit of incompetence and awkward mistakes and problems that plague politics and government â€“ some issues cannot be predicted in this era of globalisation and terrorism, but embellishing the truth to look good in government creates mistrust.

Brown must ensure that that the ills and excesses of the Labour Party are curbed, he must move fast to dispel the impression that labour is tainted with corruption and ensure that the rules on the funding of political parties are complied with.

Brown should continue in the modernising work of public services to ensure that delivery is not only efficient but effective and that the policies that back these programmes are about using the resources of the country in the most economic way. But, after all the tinkering and restructuring, he needs to get back and focus on what the people of this country not only want, but deserve by voting in a labour government.

Brown must ensure that his policies are rooted in social justice and that the poor people of this country have as every right to benefit from Britain being an advanced country as are the people who help to generate the wealth.

The one thing that separates the advanced world from the developing world is that people in the advanced world are better educated and have better skill sets to secure better paying jobs. Brown needs to focus on the twin issues of poverty and education. The country needs to get back to work; the country needs to return to the days of old Labour and ensure that there are enough jobs for the people to warrant all earning a liveable wage. But dealing with jobs is also tied up with the education of the country. Good schools and excellent education go hand in hand as the bedrock of sustainable development. So the Labour Party must still believe in that attainable dream of full employment, even if it will not create all the jobs themselves and will partner the private sector and the trade union movement in implementing this dream. 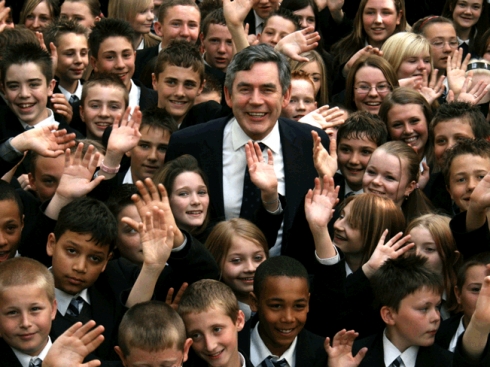 But aside from the social and economic issues that a Labour government should deal with, it must also deal with political issues that go to the core of representation. Britain is a multiracial country but a large section of people, from ethnic minority communities, are not represented. There is still a â€˜black penaltyâ€™ in politics in Britain. The representation rate of black people in politics must be raised; this may mean more black councillors, more black members of parliament and many many more black people on the boards of public bodies.

Brown should embrace diversity and include more black people in his government and prove to all that where Blair created Emilyâ€™s list to increase the representation of women in politics, he will ensure that black people in this country are not denied their contribution to citizenship and running this country.

If Brown can bite on these issues, I will then know that there is enough equality of opportunity to enable me contribute my skills and passion to the running of this country and I will have no excuse for my not joining the Labour Party.

Because after all Labour is the only comfortable home for someone like me who subscribes to the principles of self reliance and self determination, freedom from all oppressive rule, and Pan-Africanism.

Maybe Brown may just be up to my challenge!!!!!

Ade Sawyerr is partner in Equinox Consulting, a management consultancy that provides consultancy, training and research services and focuses on formulating strategies for African, Caribbean, Asian and minority ethnic, disadvantaged and socially excluded communities. He also comments on political, economic and social, and development issues. He is a member of thenkrumaistforum@yahoogroups.com He can be contacted through www.equinoxconsulting.net or by email on jwasawyerr@gmail.com.