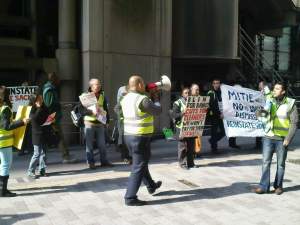 As Union Bank of Switzerland (UBS) announce quarterly profits of Â£772 million this week, cleaning workers and their supporters will be demonstrating at their London offices on Friday 12th February.

The demonstration is in protest at attacks on workersâ€™ pay and the dismissal of Alberto Durango, the cleanersâ€™ now former shop-steward.

Alberto and his supporters believe his sacking is directly related to his workplace union organising and campaigning work.

Many of the cleaners â€“ who are members of the Unite trade union and are predominately migrants from West Africa, Latin America and some European countries â€“ were involved in a campaign in 2008 to win the â€œLondon Living Wageâ€ at UBS, currently Â£7.60 per hour.

Despite this victory, most workers still have to work multiple shifts in order to make ends meet. UBS has encouraged a race to the bottom resulting in their cleaning contractors cutting cleaning staff hours â€“ therefore pay â€“ or make redundancies.

This in contrast to UBSâ€™ announcement on 9th February reporting a 34% increase in their bonus pool to Â£1.72 billion and their decision last year to increase their London banking staff wages by 15% â€“ 20%.

â€œMariaâ€ has been cleaning desks and toilets at the UBS Lombard Street offices for over 3 years.

The Company has broken their promise that they would not change our hours or conditions after we won the â€˜Justice for Cleanersâ€™ campaign. A year after getting an agreement on the living wage, we are still fighting. I just want to earn enough to be able to spend time with my family during the weekend.

The public are outraged by the continued and undeserved bankersâ€™ bonuses since banks like UBS, Goldman Sachs and Royal Bank of Scotland have been bailed out by public money across the world.

Whatâ€™s the bankersâ€™ excuse for attacking the subsistence wages of the people who wipe their computer screens and clean their toilets?