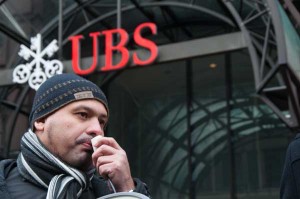 What started out as just another workplace dispute inside one London office for Union Bank of Switzerland (UBS) now has escalated into an international campaign led by migrant workers spanning 3 continents to picket UBSâ€™ offices in Zurich, New York, Buenos Aires, Kyiv and other countries.

As London-based Carsten Kengeter came under-fire this week for being revealed to be UBSâ€™ highest paid employee on Â£8.3 million, receiving a Â£7.8m bonus. UBS, the Union Bank of Switzerland has been also under criticism from their lowest paid employees leading a â€œJustice for UBS Cleanersâ€ campaign in response to the bank attempts through its contractors to drive down the cleanersâ€™ 2008 victory of â€œLiving Wageâ€ pay and conditions.

â€œI am a worker, a mother and housewife. Why are [Lancaster and UBS] trying to deny me a living wage and cut my spare time to be with my family?â€

On 1st February UBS transferred their cleaning contract at its London offices to Lancaster Cleaning Services. By law the workforce’s terms and conditions should have remained the same; the workers received commitment to TUPE in writing and a verbal promise to an increase of hourly rates from Â£7.50 to Â£7.65.

The Justice for UBS Cleaners campaign claims that the new UBS contractor Lancaster has verbally instructed the workers to accept: a 10.75% cut on a full time cleaners’ weekly wage, increased workloads, opt out of EU 48 hour working week directive. On the 4th February, Lancaster sacked union shop steward Alberto Durango for resisting these changes and so the cleaners are also campaigning for Alberto Durangoâ€™s reinstatement. 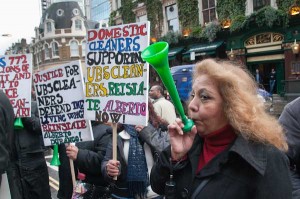 Since the 4th February there have been 2 demonstrations outside UBS Capital offices at 100 Liverpool Street where protestors vented their disgust at UBS treatment of the cleaners. Since the latest demonstration on 5th March, Lancaster management verbally threatened workers to accept the new terms and conditions or face â€œconsequencesâ€.

The move came after cleaners (majority migrant and female) refused the new hours set by Lancaster and reaffirmed their demands.

In a letter to the Chairman of UBS, Chris Ford from Unite the Union said:

â€œUBS boasts having â€˜people from different backgrounds, cultures and experiences is indispensable in today’s global business environmentâ€™. The lowest paid workers in your Banks are overwhelmingly workers of a diverse background and they are being treated like second class citizens by your Bankâ€

With recent immigrant strikes in France and Italy, this dispute has become symbolic for the fight to protect rights of migrant workers not just in London but major cities all over the world.


Thanks so very much for putting this out here.

Pictet & Cie.- claim they are the â€œRolls Royceâ€of swiss banks.

Crime. —â€œ an act committed or omitted in violation of a law.â€

The bank and itâ€™s officials/lawyers deliberately withheld crucial documents requested under a High Court order. The bank and itâ€™s officials/lawyers deliberately withheld evidence from the Police, and one of itâ€™s account managers Susan Broadhead gave a false witness statement to the Police.
Another one of itâ€™s managers Nicholas Campiche ( Now Head of Pictet â€“ Alternative Investments.) concocted a letter pretending to be a client and closed his account. The senior partner (Ivan Pictet.) sought to have numerous documents destroyed,along with those copies held in their London officeâ€™s of Pictet Asset Management. Initially stating that they were forgeries then their lawyers Peters & Peters â€“ Monty Raphael â€“and the barrister Charles Flint.Q.C. later had to admit in Court that the documents were genuine.

———â€œ Constituents of mine have lost Â£2 million through fraud. The fraudster used Pictet & Cie – – a French Bank – – and Pictet Asset Management to back the fraud being perpetrated.â€â€

(2) It is a criminal offence for a bank to lie to the police and the bankrupts trustee in bankruptcy in so far as any knowledge of, or dealings with the bank was refuted .

(3) A bank can be guilty of Contempt of Court if it fails to comply fully with the Courts order for discovery .

(4) The banks contempt is further compounded if it fails to address its error after it is specifically drawn to the to its solicitors attention. ( Monty Raphael).

(5) It is a criminal offence under the Financial Services Act to seek to destroy evidence that might be relevant to an investigation .

(6) It is a criminal offence not to relinquish control of funds to the Trustee immediately the fact of the bankruptcy is drawn to the banks attention.

(7) It is a criminal offence to lie or otherwise obfuscate the lawful and proper enquiries of the F.S.A.

In the F.S.A. cover up , they concluded that there had been â€œ Rogueâ€ elements in Pictet & Cieâ€™s , London operations . They had been moved from their London Office so who was there left to prosecute. â€œ Unbelievable.â€

(1) Bankers who behave irresponsibly should face professional consequences.
(2) If anyone is found to have behaved criminally they must be prosecuted.
(3) The F.S.A and the Serious Fraud Office should be following up every lead,
investigating every suspect transaction .
(4) We need to make it 100% clear â€“those who break the law should face
prosecution.
(5) That we make sure we root out any wrongdoing that may have happened, whoever
is involved, however high or well connected they may be.

(1) To ask the secretary of state what steps he is taking to ensure that Swiss Banks such as Pictet & Cie do not evade criminal prosecution under EU law even when the illegal act is committed by a London based subsidiary.

(2)To ask the secretary of state what steps he is taking to protect the rights of UK citizens who seek redress following criminal activities by Swiss banks with subsidiary offices located in London.

On Dec 9th,2008. the complaint was sent to 150 Members of the House Of Lords and 230 Members of Parliament.
On Aug 19th.2009.another complainants file regarding the â€œcover upâ€ was forwarded to the same 380 members.

We started our campaign in June 2008 — via the â€œnetâ€ to highlight our fight to get â€œjusticeâ€. In our second year campaign we hoped to reveal further damning evidence . Due to there being an on going Police investigation into our complaint we are at this moment unable to place dozens of documents on to the â€œnetâ€. Again we thank other â€œ E- Mailersâ€ for their information in relation to our campaign.

Quote. ( Americaâ€™s Top Lawyer .)
You can be the richest man in the world with the best lawyers that money can buy but you cannot win against a man who has got nothing left to lose and is telling the truth.

*** We note that there has been a sharp increase in Peters & Peters partners leaving to go to other practices. Moving does not alleviate them of any responsibility from any illegalities that may have occurred at Peters & Peters during their partnership tenure. From 1999 onwards.

*** Were currently waiting to see if the Police and other Law Enforcement Bodies attempt to cover this case up like their F.S.A. counterparts. If they do â€“â€œ then watch this space.â€

We were informed that due to pressure from our M.P. that the Ministry of Justice have asked Lord Myners to investigate our claims that the F.S.A. covered up the illegal activities of Pictet Asset Management. London.

The consensus of opinion is the Pictet & Cie should be prosecuted , and that their U.K. banking licence should be taken away.

Their Solicitors at Peters & Peters .London â€œ struck off and prosecuted..â€


*** Were currently waiting to see if the West Yorkshire Police :-
(1) Chief Constable. — Sir Norman Bettison.
(2) Forces Solicitor . — Mike Percival .
(3) Head Of Economic Crime Unit. — Det . Chief Inspector Steven Taylor.
continue to attempt to cover this case up like their F.S.A. counterparts. If they do â€“â€œ then watch this space.â€

We were informed that due to pressure from our M.P. that the Ministry of Justice have asked Lord Myners to investigate our claims that the F.S.A. covered up the illegal activities of Pictet Asset Management. London.
It has been noted that the book launch for PICTET was held at Lord Myners Belgravia home.We might as well have asked Ivan Pictet to investigate our complaint.-or someone from FRIENDS RE-UNITED.
Lady Myners on Prix PICTET advisory board.

The consensus of opinion is the Pictet & Cie should be prosecuted , and that their U.K. banking licence should be taken away.

Their Solicitors at Peters & Peters .London â€œ struck off and prosecuted..â€
In America —- they would have all been in prison for the last seven years.


[…] interesting Colourful Radio interview with Henry Bonsu and Chris Ford, one of the organisers of last Friday’s Justice for UBS Cleaners international demonstration for sacked Unite shop steward Alberto Durango, and also to defend the living wage at UBS London […]

We note that Det Chief Inspector Steven Taylor has been removed as Head of the Economic Crime Unit and demoted to Det. Inspector.

2003 —– F.S.A. — States rogues operating in Pictet’s London office. Ivan Pictet
states that documents were forgeries but were later proved to be genuine in
the British Courts. He had documents destroyrd in their london office —
hoping to hide the crimes.

2007 .- – – The Securities and Ecxhange Surveillance issued a recommendation
that the Prime Minister and The Commissioner of the FSA to take
disciplinary action against Pictet Asset Management â€“ Japan Ltd.