In discussion with Margaret Hodge MP

So on Wednesday night, your friendly neighbourhood community activist and blogger attended the excellent play “A Day at the Racists” and was in a post-show discussion with Margaret Hodge, Minister of State for Culture and also Member of Parliament for the Barking constituency. 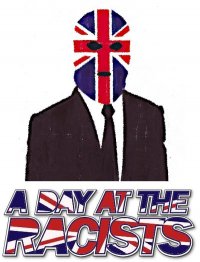 The play to review it briefly, was excellent. It was not describing the exact situation in Barking for this election but a scary glimpse of a possible future where the British National Party moderate themselves to accept a British mixed race Asian candidate. It was well-researched, very funny in the first half and then becomes a visceral emotionally and political rollercoaster in the second half, also it upset Margaret. For a more fuller review look here. Below is a short Al-Jazeera (English) news item on the play:

So in the discussion I was placed to sit next to Hodge,and before I describe it, I been speaking to an independent company that filmed it and so I will put up a Youtube video of the full panel discussion as soon as I can and you can make up your own mind on how Margaret, the writer of the play Anders Lustgarten, and I did.

What I will tell you now about the discussion is that I did my best not to interrupt, shout or ridicule Hodge, despite my serious disagreements with her beliefs and comments. I’m not sure she showed me or the audience the same courtesy however. In fact I even accepted to her invitation to campaign with her talking to local residents between now and the election, which was caught me unexpected.

However it was a very, very interesting experience, and I wasn’t able to say all the things I wanted to but I was able to ask her to apologise for her Observer piece, she did apologise for “offending me” but she stood by her views that economic migrant families should have less rights as “settled communities”.

Watch this space and the video will be up hopefully before the election.


Some good people talk to Margaret Hodge – MP for Barking (as blogged by @justinthelibsoc) http://tinyurl.com/ylsdpon worth following


Take a look at http://www.margarethodge.info for facts about Hodge and her terrible record.

Any genuine Anti-racists would be better voting Green than for this unprincipled opportunist.