From the Otesha Blog, we are publishing this as part of Fossil Fools Day 2010 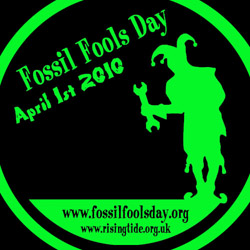 Did you know Canada supplies more oil to the U.S than the Middle East? I didnâ€™t before the other night, when I went to the premiere screening of new film Dirty Oil. As well as thoroughly enjoying myself celeb-spotting (Neve Campbell! that CBBC presenter Josie Dâ€™Arby! Some guys so good-looking they must have been famous!) I learnt about the CRAZY world of Canadaâ€™s tar sands.

Now, I donâ€™t want to go all good guy / bad guy on you, but the tar sands are basically evil. They are the fastest growing source of greenhouse gas pollution in Canada, they are polluting the water, destroying the Boreal Forest, deforming fish and wildlife in all kinds of nasty ways, and elevating cancer rates in communities downstream, many of which are indigenous (or first nations) communities.

Guys, this is just not fair. As one audience member from last night wrote on the facebook group – â€œCanâ€™t stop crying :0( Havenâ€™t we done ENOUGH to indigenous tribes?! If we stomped down the door of one of these oil execâ€™s houses and destroyed it and fed his children poison there would be uproar!! But this is ok?!â€.

Iâ€™m totally not advocating that we go and poison oil executivesâ€™ children, because that would mental. But, just stop and think about that for a second. That is exactly what is happening to these indigenous communities, and hardly anyone knows about it.

So, this is completely unacceptable, obviously. What can we do? Well, itâ€™s funny you asked that, cos thereâ€™s loads. Write to your MP, donate to the campaign, spread the word. Join your local Tar Sands network and get involved in an action. Just donâ€™t sit by.

If you donâ€™t have time to go see the film, take a few minutes to watch this video I made of a tar sands action in Copenhagen with the UK Youth Climate Coalition. It is eye-opening, heart-breaking, galvanising.