On the 9th April, in Flinders Street, Melbourne, Australia. There were two rallies, one was pro-immigration rally and the other was the anti-immigration rally run by the British National Party’s Australian opposites. TMP contributor and Australian resident and political activist, Anita Ceravolo reports aboutÂ who they are andÂ how anti-fascists should respond. 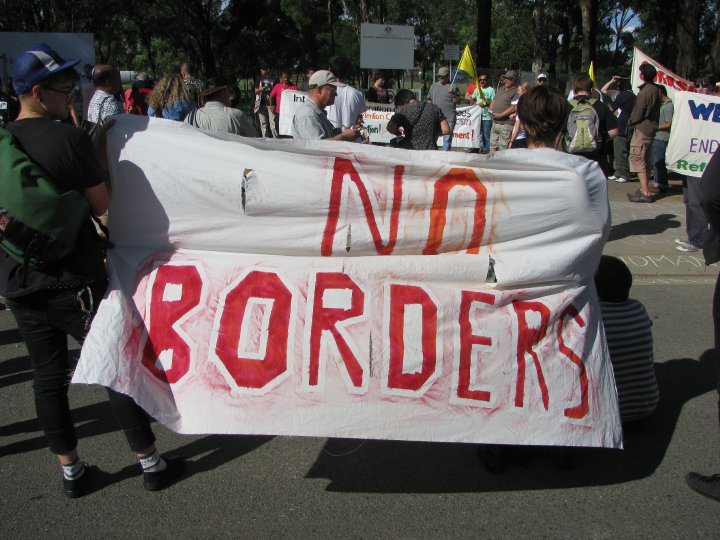 Who are The Australian Protectionist Party?

The Australian Protectionist Party (APP) is far right party which opposes Australia taking in refugees and asylum seekers. They are very much an Australian version of the BNP. Â For the APP, each major Australian political party is too soft on refugees. This is a worry considering Ruddâ€™s latest policy on refugees is to put a freeze on Â processing Â asylum seeker application from Afghanistan and Sri Lanka. This policy clearly contravenes UN convention on the right of the refugee.

â€˜We believe that the our people have a right to survive, and that is why we oppose massive Third World immigration which is taking us down the road to a situation where the Australian People will end up as a miniscule minority in their own countryâ€˜

ON Australia day 2010 (January 26), The APP announced free membership so they can get over 500 members and register as a political party. The APP Facebook group has 460 members. They are small, but active..and unfortunately they have the tacit support of a growing number of Australians.

The APP organises as the debate on refugees or â€˜boat peopleâ€™ becomes moreÂ polarised between those that fear we will become overrun with refugees.Â They are playing on the fear thatÂ these refugees will put a strain on our resources and suffocate our national identity.

Opposing this viewpoint are those that recognise the flow of refugees and asylum seekers from conflict zones is relatively small, and believe that these migrants are of benefit to our society andÂ not a threat to it.

The APP have been letter boxing in Sydney and Melbourne… here is an example of one of their leaflets.

The APP have organised demonstrations against the Governments â€˜too softâ€™ approach on refugees in Sydney and Melbourne.Â  An alliance of anti fascist groups have organised counter protests confronting the APP. Both in Melbourne and Sydney, The APP were clearly outnumbered by anti racist activists.

The need to counter organise

The APP in Sydney advertised their rally outside Villawood detention for April 10. About 15 APP supporters showed up. Opposing them were approx 150 activists from the progressive and radical left. The APP wore shirts with the party emblem. The police ushered the small band of fascists to another gate of the detention centre and then formed a protective barrier so we could not have access to the fascists… but we have photographic evidence that their numbers were small. On their Facebook page they report that they had 80 supporters at the rally, and they referred to the counter protestors Â as â€˜unemployedâ€™ andÂ  â€˜dial a mobâ€™. Â

The social justice movement must confront fascists such as the APP at every opportunity. They are small but must be prevented from growing and becoming more politically legitimate. They use the same old dialogue of hate and fear to organise and recruit supporters. They choose to be ignorant of the facts when it comes to migration.

More pictures from the action are below: 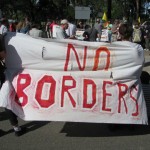 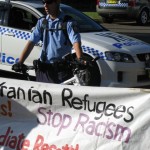 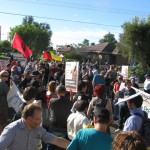 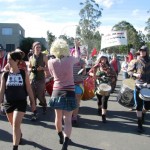