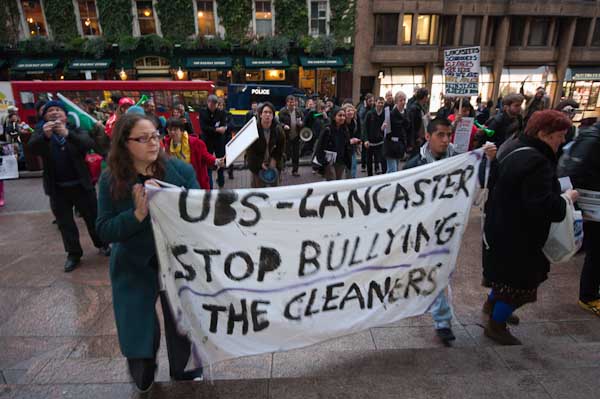 In March, what started out as just another workplace dispute inside one London office for Union Bank of Switzerland (UBS) had escalated into an international campaign led by migrant workers. Today Friday 23rd AprilÂ at 5pm outside UBS Capital, 100 Liverpool Street (see map)

UBS last week announced their highest ever pre-tax profits since the credit crisis began of US$2.3 billion and has fought criticism last month when London-based Carsten Kengeter was revealed to be UBSâ€™ highest paid employee on Â£8.3 million, receiving a Â£7.8m bonus. Despite these eye-watering pay packets at the top, UBS has refused to intervene when their cleaning contractor Lancaster has given their lowest paid London employees a 10.75% pay cut on a full time cleaners’ weekly wage. The â€œJustice for UBS Cleanersâ€ campaign is a response to the bank attempts through its contractors to drive down the cleanersâ€™ 2008 victory of â€œLiving Wageâ€ pay and conditions.

In response to the Justice for UBS Cleaners campaignÂ LancasterÂ conspired with the UK Border Agency to harass and victimise the migrant cleanersÂ which has resulted inÂ one UBS cleaner is now being held in a detention centre.Â

The cleaners and their supportersÂ will also be demonstrating not only in defence of the cleaners’ conditions and for the reinstatement of sacked shop steward Alberto Durango, but also in protest at cleaning company Lancaster’s role in the detention (and planned deportation) of a recent ex-UBS cleaner.

So if you can come,Â in theÂ words of oneÂ supporter:

Bring friends, bring something that can make a noise, bring banners… and come yourself too…

More photos and an update from the last demo