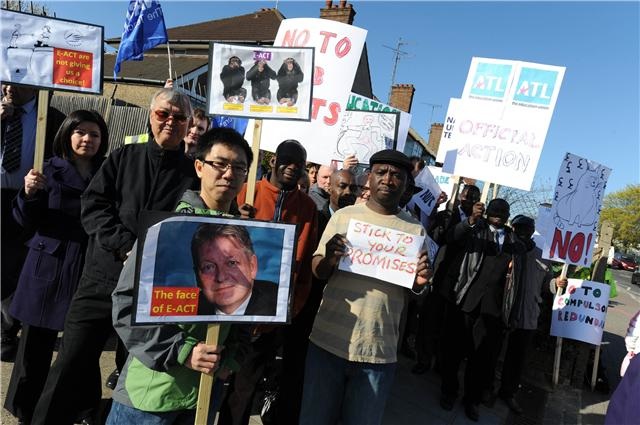 The overwhelming majority of teaching staff at Crest Boys Academy were on strike to on Wednesday, 21st April. A planned visit to the school by Nick Clegg was cancelled. The strike was taking place because E-Act (previously Edutrust) are making staff redundant despite recent reports of their Chief Executive, Sir Bruce Liddington, having a salary and bonuses approaching Â£300 000 per year and also lavish expenditure by top executives on luxury Â£300+ suites in hotels, mini-bar tabs and Â£250 pound taxi rides – all at taxpayer’s expense. Lord Bhatia, Chair of Trustees of E-Act, in its previous incarnation as Edutrust, resigned after allegations of financial irregularities.

Hank Roberts, Brent ATL and NUT Secretary said â€œThey changed their name, replaced their top person and carry on as before. It reminds me of a dodgy firm on Watchdog. Surely an enquiry should be held into their finances.â€

Shane Johnschwager, Brent NASUWT Secretary said â€œNick Clegg supposedly supports Academies and is now running scared from the consequences of his beliefs. If he is really interested in seeing what is happening in these schools he should have come down to the demonstration and met the hard-working teachers forced into taking strike action by E-Act. I challenge Nick Clegg to either defend the expenditure of E-Act or condemn it.â€