On Wednesday 21st April at the Guardian Climate Minister Debate in London, the room was crammed with the luminaries of the climate world. 10:10, Oxfam, WWF, Greenpeace, Climate Rush, Green Alliance and the UK Youth Climate Coalition were there, as well as environmental journalist George Monbiot waiting like an attack dog in the front row, ready to pounce. 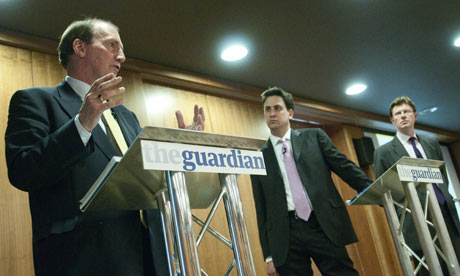 First impressions? Well with three very-nicely-spoken men standing behind the podiums making gentle jibes at each other, I thought I had perhaps stumbled into a boysâ€™ school debate. Ed Miliband, current Energy and Climate Change Minister, was the enthusiastic and slightly domineering head boy; Greg Clark, shadow minister, the one who didnâ€™t know all the answers and was regularly found cheating on his homework; and Liberal Democrat Simon Hughes, the rebel who was just crying out for a leather jacket and a fag to puff on.

While Ed and Greg, arguably the only ones who might actually find themselves in the job in a month, introduced themselves with bombast about â€œwidening the circle of the committedâ€ and courting the various campaigners in the room, Simon was free to get down to business. He made the point that this parliament would be the last who had a real chance to make change and protect our environment, and that we needed â€œjoined-up thinkingÂ  – we canâ€™t recover from the economic crisis without solving the climate crisisâ€. Hear hear.

So who measures up?

Letâ€™s see. Here are a few of the points they debated.

Third runway at Heathrow â€“ Ed was for (although interestingly I think he is toeing the party line here as when Labour were making the original decision I heard he was dead against it), Greg and Simon against. The big difference however, which Ed pointed out, is that although the Tories are against the third runway at Heathrow, they are very much for expansion of other airports, so there would be no cut in carbon emissions there. Simon, on the other hand, said that the Lib Dems would limit airport expansion in the whole of the South East. The Lib Dems are also proposing an interesting tax on planes, not passengers, to discourage half-empty, gas-guzzling flights.

Climate Sceptics â€“ Oh goodness, did Greg get himself in a muddle here. Faced with the statistic that a third of Conservative MPs donâ€™t even believe that climate change is happening, Greg Clark just opened and closed his mouth like a fish out of water. Ed, however, said that it was the responsibility of all politicians to come back to the science and Simon suggested we all need to become much better mobilised against the right wing press.

Energy â€“ Prompted by a question on peak oil and a grilling by George Monbiot on fossil fuel extraction, our ministers found themselves discussing and defending all sorts. Ed accused Conservative councils of turning down a third of all wind turbine applications (except that still leaves two thirds, which presumably Labour and the Lib Dems are turning down as well â€“ seems there are NIMBYs in all parties). Simon was the only one to mention the tar sands in Canada and the disgrace that they are, and Greg dropped a clanger by saying that letting his constituents oppose wind farms was merely â€œgoing with the grain of human natureâ€. Pity that the grain of human nature is currently heading for the extinction of human nature though, isnâ€™t it?

Zero carbon Britain â€“ â€œBy what date would Britain become zero carbon, according to each of the parties?â€ Well, Labour doesnâ€™t have a date but insists that they will cut emissions by 80% by 2050. Lib Dems see a zero carbon Britain by 2050, and would achieve this through personal carbon allowances, which they want to start piloting in small phases next year. I donâ€™t think Greg had ever entertained the idea of Britain becoming zero carbon, as he just looked pretty surprised by the whole thing.

The Guardian poll afterwards gave about half the vote to Ed and half to Simon, with a small minority voting for Greg. I think Simon pipped it for me â€“ like a climate version of Jerry Maguire, he had me at â€œtar sandsâ€.


check out my new blog post RT @justinthelibsoc: @hannathomas your post is up: Spotlight on Debating Climate Ministers http://bit.ly/97ZhME


@hannathomas your post is up: Spotlight on Debating Climate Ministers http://tmponline.org/Zr


check out my new blog post RT @justinthelibsoc: @hannathomas your post is up: Spotlight on Debating Climate Ministers http://bit.ly/97ZhME


actually it is not that hard to setup wind farms, the only problem is that it requires lots of capital investment.*';


[…] 27 Apr This is cross-posted from The Multicultural Politic […]