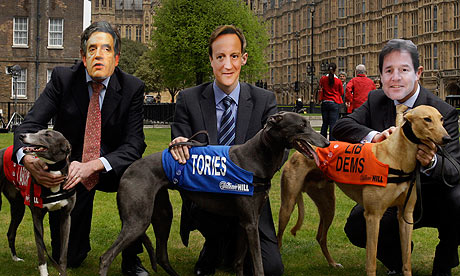 I thought that this election would be fought on the principles, philosophies, and policies that would make Britain a better place and speed up the recovery after the bankers led us into the deepest recession ever in 70 years.Â  I have been proved wrong already.Â  Instead dealing with how to mend the economy, get businesses thriving and get jobs going again, we are being treated to the old tired political arguments; on the same old battle grounds of Defence, Europe and Immigration.

So how does the whole Â£100 billion Trident nuclear system affect me if it will not and cannot be used? How and whom does it make me safe from? Iran? China? Why do the Chinese need to fight us when they are already whipping us in what matters, the economy.Â  Will Trident or its replacement prevent anyone of us in Britain from being killed in fight previously known as the “Global War on Terror“?Â  Is the nuclear deterrent, the best use of our taxes?

There is a Commonwealth and Britons now all live under the European Union so it should not be a surprise that Europe always comes up in election campaigns. Â But the arguments seem so bizarre to me.Â  Should we keep the pound, cede our sovereignty, get more for our disproportionate financial contribution or maintain the faÃ§ade of playing second fiddle to France and Germany in Europe.Â Â  So what,Â  if a few laws that benefit people in Eastern Europe are imposed on us?Â  Will it be such a big deal if Russia decides to join Europe? Incidentally the same people who are proud Eurosceptics and claim that the Commonwealth does not serve the “British” interest well enough, are also the staunchest believers in NATO.

The politicians, pollsters and analysts are talking about what type of representation we need in order to be truly represented; and yet Black and Asian people are wholly underrepresented in politics in this country and no one wants to talk about increasing their numbers on the main partiesâ€™ front bench.Â  The focus is on the debates and how the third party candidate has become a sensation.

With the polls showing the incumbent party in third place, all the talk is about the election results and a hung parliament as if that should affect the way I vote.

My major difficulty however is that these discussions are masking our understanding of what the parties stand for.Â  Their manifestoes do not show the sharper differences of previous elections.

One party claims â€˜a future, fair for allâ€™ without explaining what things are not exactly fair and what will be changed to bring about fairness.

Another extends â€˜an invitation to join us in governmentâ€™.Â  We thought that they already had plans about how to govern.Â  Their big society is about taking over failing schools, when we all know that in the inner cities the schools are failing because of lack of commitment and resources and that government is about fixing things that do not work, not about selling public services to the highest bidder.

The other promises â€˜a change that works for youâ€™.Â  Now, that is interesting except that I do not know what change they mean.Â  I know they are the sensation of the moment but frankly I knew what they stood for when they promised 1p tax for education and I must confess that I did my own version of â€˜skirt and blouseâ€™* voting for them over the years just to keep the Conservatives or Labour out when it suited me.Â  Now I no longer know what they stand for.

I had hoped that this election would have been about local good schools, a great health service, decent housing, sustainable transport, creation of jobs for the unemployed and a better system of producing and distributing the wealth of the nation.Â  It could have been about valuing all people who contribute to make Britain a good country, about making Britain a shining example to other nations that the colonial mother country, with all its immigrants, has finally found its way and it is ready to lead the world to a progressive future.

I had really hoped that immigration would not rear its ugly head in this election, that the issue of Britain as a multicultural and multiethnic society has been settled once and for all and that all immigration is a good thing for world peace and stability.Â  How wrong I was.

But then what really makes immigration such a big issue. Â That many members of the electorate say:

All the parties want to limit immigration.Â  Some want to set up points, some to regionalise it, others to base it on skills, others to freeze it and there are different permutations between all the parties to the blatant one of the BNP that they will repatriate us all if given the chance to run this country, even our children who were born here.

The main parties should leave the immigrants alone. They are not the recession or the cause of failure in this country!

Tweets that mention GE2010: Rant of the Month -- Topsy.com


[…] This post was mentioned on Twitter by Justin Baidoo. Justin Baidoo said: GE2010: Rant of the Month http://tmponline.org/Tv […]