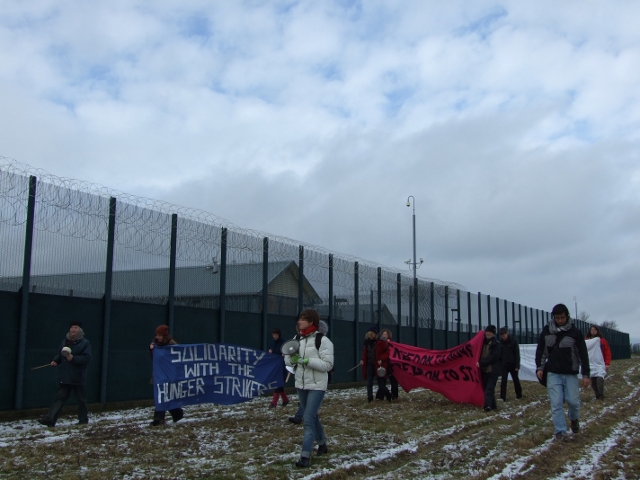 Ms K participated in the recent six week hunger strike in Yarl’s Wood Removal Centre. She was wrongly labelled a ring-leader by guards and on the fourth day, tricked into leaving the crowd of other women, snatched and ghosted to Holloway. She suffered racist abuse from guards and was told “You are from the jungle, you should go back.”

Ms K then faced an onslaught of unfounded and shameful allegations from UKBA aimed at discrediting her and preventing her release. Her solicitor Toufique Hossain, Lawrence Lupin Solicitors and barrister Raza Halim, Garden Court Chambers had to work overtime to prove that these allegations were false.

As a victim of torture, Ms K should never have been detained. She fled to the UK in 2005, having suffered years of domestic violence from her uncle in Nigeria and because she refused to submit to female circumcision.Â  On arrival, she was told by others in the Nigerian community, that the hostility and discrimination from the Home Office against Nigerian people was so severe that she didn’t stand a chance of getting asylum. She lived underground for years relying on friends and charity. In 2009, she was arrested and convicted of possessing criminal property because she had a few thousand pounds in her bank from the sale of her parent’s home. She was remanded in Holloway and eventually in desperation, and believing that she would be released sooner, pleaded guilty and was sentenced to 14 months. While in prison, she made an asylum claim but when she finished her sentence, instead of being released she was taken to Yarl’s Wood. She reported to the authorities that she was a survivor of torture and showed them her scars, but no action was taken. The organisation of health professionals, Medical Justice, interviewed her and documented the torture she suffered.

At the bail hearing, Immigration Judge Mr Pullig accepted expert medical evidence of the domestic violence Ms K suffered which had been dismissed by the Home Office. He also refused a request that Ms K be tagged as a condition of her bail.

Delighted to be free, Ms K sent heartfelt thanks to everyone who had supported her:

“My release is proof that our hunger strike won victories. We felt like forgotten people detained indefinitely without trial, often physically and mentally sick. Many of the women are mothers like me suffering terribly from being separated from our children. We couldn’t have kept our protest going without the determined support from outside and I especially want to thank those women who kept me going when I was ready to give up all hope. Four former hunger strikers are still in prison and many more are still in Yarl’s Wood. I won’t be quiet until they are free.”

Cristel Amiss, from Black Women’s Rape Action Project which provided round the clock support for Ms K and other hunger strikers commented:

“The Home Office has been caught out dismissing Ms K’s suffering as a victim of domestic violence. Most of the media discussion on immigration is aimed at exploiting people’s anxieties and turning people against each other. But when people hear what women like Ms K have suffered their response is usually one of human compassion and support for her right to protection. We encourage people to ask their prospective MPs what they will do to end the callous policy of detaining mothers, children and other vulnerable people.”

Political policing in Glasgow – racists roam free but anti-fascists arrested for shouting back
June 19, 2012
My experience of Glasgow’s attitude to grassroots Multiculturalism and Asylum Seekers
January 29, 2012