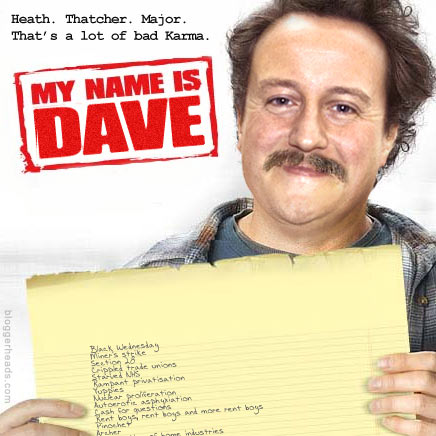 HisÂ starting election speech back in April was filled with inspirationalÂ references from JFK to Barack Obama, he asked the Great British public to join him in the next UK government. Beaming with pride, he presented an expensive looking hardback manifesto showing that this was a “serious” party for Britain. The polls in April were showing a decisive Conservative victory, “Vote for Change”, he said, and they did. The problem is it wasn’t the change he wanted.

For the first time since 1974, Britain has a “hung parliament“. Dave warned us that his friends in the financial markets may give Britain a bad rating if the public didn’t do or know what was good for them.

Dave asked the public to “choose hope over fear”, he may be surprised to find out that they listened. The “hung parliament party” led by Nick Clegg has now offered a helping hand despite Dave and his influential friends warning Britain about economic and constitutional ruin a hung parliament would bring. The Great British Public has decided and voted for none of the above.

Failure to win a decisive victory against the most unpopular Labour leader and lowest popular vote for Labour since Michael Foot in 1983, wasn’t a memento that Dave was anticipating. Where did it all go wrong?

Vote for Change, is a good slogan as no-one wins elections saying “Let’s keep the same old, same old”. However what sort of change was he offering?

David Cameron’s “Big Society” idea sounded impressive but was found to be inconsistent. No wonder as it was part of the “Red Tory” philosophy of Philip Blond. It sounded impressive because active citizens do want more power and responsibility and inconsistent because rather than reducing prison numbers and unaccountable bureaucracy, they will increase both state and private prison building & schools and hospitals that will only be privatised to billionaire Tory backers, not exactly “power to the people” Dave!

Part of the “Red Tory” plan was to allow parents to set-up their own “free schools”, a policy that was denounced by the Tory leader of Kent county council.

“At the moment the more academies and free schools you operate, under the current academy funding arrangements, the less maintained schools would get,” he said.

“Secondary schools are around Â£4,000 plus per pupil. If 10 per cent, 12 per cent, 15 per centÂ of that was taken away from maintained schools and given to free schools and academies – local authorities still have statutory functions to perform.

“They have to arrange and organise school admissions, statements for special educational needs pupils, a whole range or services that need paying for.

“That can’t be taken away from us and given to free schools or academies because they don’t have the statutory duty to carry out these responsibilities.”

On the Tory-backed flagship policy of “Academies”, triumphantly touted by the then Prime Minister Tony Blair was given this verdict by Kent’s leader:

He also said It was “extraordinary [that] academies can refuse to admit some of the most vulnerable young people under the current admissions.”

The Torygraph generated expenses scandal damaged all political parties, and the public wanted penance. So Dave offered the public fewer MPs and a cheaper parliament, this means bigger constituencies which brings a smaller chance of getting the ear of your MP, more wasted votes and less accountability. Great. Surprised that the public didn’t jump for that one.

The economic crisis gave Dave a gift of revealing the weakness of New Labour economic policy under Gordon Brown. So how did Dave respond? By pledging a unilateral tax on the banks rather than increasing tax on the rich, a promise to mess around with the financial regulation system (making it cheaper too), and to bring an age of austerity for the poor through deep cuts in public spending and public sector pensions whilst planning a tax break for the wealthy.

Shock horror! The voting public wasn’t too keen on that one.

What does that mean? Well he later explained, its pledging not to increase Heathrow whilst planning to expand other regional airports, it means cycling to parliament with your chauffeur driving your paperwork for you. Dave’s going “green” means chartering a private plane to take lots of short-haul flights across Britain. Is that change we can believe in Dave?

Now a Tory minority government can try it’s luck against a Liberal-Labour “majority” or Cameron can concede that he won’t have enough votes to run Britain.

Whatever happens, the fact remains that Dave is an impressive failure. He can console himself that he isn’t the biggest loser in parliament.


Failure to win decisive victory against the most unpopular Labour leader since 1983,not a memento Dave was anticipating http://bit.ly/acnYTe


Love the video. The pound has already devalued. This whole thing is a real clusterfuck and the results are so unfair. If you compare votes to seats the Labour-Lib Dem contrast is insane.
The good news is that the Tories haven’t got their dirty mitts on the economy just yet. I’m not ready for a double dip recession – I haven’t got my H1B yet!
Keep Cameron away from the Social State!