After 5 days of selling themselves to the highest bidder, the Liberal Democrats have gone to bed with Cameron’s Conservatives. Liberal Democrats across the federal executive and parliamentary group are quietly grinning that finally after almost 70 years they are back in government.

Peter Mandelson predicted “[People who] vote Lib Dem, they are making it easier for the Tories to get in”. It isn’t often I agree with Mandelson but he was spot on, those who voted for one public schoolboy, got another one free as Prime Minister. Welcome to Clegg’s definition of “New Politics”.

Alex Salmond, Scotland’s First Minister and leader of the Scottish National Party (SNP) had urged for a “progressive alliance” and a “balanced parliament”, and even went as far as urging English voters to vote for Nick Clegg’s Liberal Democrats. 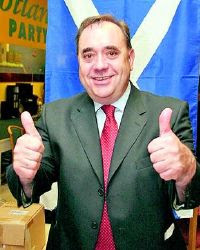 Thanks for voting for Nick

He may have been ignored by the likes of Douglas Alexander and Brown’s Labour but he wasn’t ignored by the English electorate, a “balanced” parliament was created on May 7th.

Alex Salmond’s wish and those who voted for it, got what they wanted, Labour and Conservatives were denied an overall majority. As for the “progressive alliance” some would say that the “progressive” Tories have formed an alliance with the “progressive” Liberals. Not the rainbow alliance that Salmond wanted (where the SNP would have been very powerful) and now the SNP are where they were before the election. How quaint. Though he is not political clairvoyant (the SNP didn’t get 20 seats either) Salmond is a canny political operator and swiftly backpeddled by warmly congratulating Cameron realising that he will have to work with him in the UK government. Though either way Salmond is chuffed as they both got a lower share of the popular vote than the SNP in Scotland.

I had a conversation with an active member of the Liberal Democrats and he was broadly satisfied with the deal, none of his “red lines” were crossed. A good deal and negotiation he might say when looking at Clegg’s four priorities which were:

However let’s take a closer look at the concessions and gains made:

The Lib Dems have shown unsurprisingly that they are not interested in a centre-left coalition (despite endorsement from the New Statesman and the Guardian/Observer) but are primarily interested in power not principles, that’s “Change that works for” Clegg and Cameron. It’s clear that Nick Clegg agrees with Osborne that “The modern Conservative Party is now the dominant progressive force in British politics”. So why not form a political union with them?

Less than 24 hours after the start of Cameron’s Premiership, unemployment has been announced to be at a 15 year record high of 2.5 million. The Clameron Government also have to contend with an ongoing SATs boycott backed by the Headteachers’ union NAHT and the National Union of Teachers (NUT), a joint public sector strike on pensions which has been proposed by NUT and Public and Commercial Services Union, not to mention another strike called by BA cabin staff section in Unite. The poisoned chalice of coalition government awaits (the last government were the Liberals involved was with Winston Churchill and afterwards led them to near extinction), while the trade union and civil society fightback has already begun.

Presenting some key figures in the Clameron Government:

Home Secretary: Thanks Dave I'm so not a token woman!

Hague: We have good relations with those foreigners Business Secretary: Bankers don't worry I've got your back


@matt_mcmullen Welcome to Twitter dude have a look at my latest blog post The Clameron Government – http://tmponline.org/Ly


@ns_mehdihasan you are too soft on Clegg & "progressive" is a meaningless term: Presenting the Clameron government – http://tmponline.org/Ly


What a totally biased and negative article, and one that fails to mention some of the significant and excellent reforms/policies that are coming, many of which might well be considered “left” and many which might never have existed if not for the libdems deciding to influence policy constructively instead of hissing from the sidelines. Better to see many of your policies implemented than none at all. Better to cooperate than burn bridges, poison wells and salt fields.

Yes, a simple-majority AV referendum, but also a proportional and fully elected house of lords and a commitment in the interim to ensure appointments to the lords work towards a balance that reflects the proportion of votes received at the general election.

Fixed term parliaments, the right to recall you MP, full reform of the house of commons based on the Wright Committee recommendations, a massive overhaul and modernisation of government.

Yes, nuclear deterrence stays, but a review will be done to ensure value for money (which is in essence the LibDem policy, which insisted paying for trident right-now is wrong).

Yes, nuclear power stations can still be built, at least the libdems get to make an opposing statement and abstain.

The libdems gave ground on economics and on immigration, but they get to influence what this “cap” will be and at least they’re now stopping the abhorrent labour practice of imprisoning immigrant children.

Not joining the Euro? Well that was never going to happen anytime soon. Referendum on ceding powers to Europe, democratic at least. Ensuring the independence of our judiciary from europe; maybe not so good, the European courts were the only ones in recent years able to hold back the onslaught of civil liberty erosion visited upon us by Labour.

Sweeping improvements to civil liberties, repealing all those laws and statutes that labour was using to bring about its fascist/stalinist utopia where the government knows everything about everyone every second of the day. Using the Scottish model for the DNA database, stopping abuse of anti-terror laws; regulating CCTV cameras. Protection of trial by jury, return of the right to silence, return of double jeopardy. Stopping the retention of internet/email correspondence without cause.

Reform of the libel laws, reform of lobbying.

Green policies, maybe not as sweeping as the Greens might like, but steps in the right direction. Plane tax, instead of passenger tax, a LibDem policy. Expansion of green schemes, no third runway, a high-speed rail network and Chris Huhne a man with real environment credentials in the cabinet overseeing it, something that must have those climate change denying Tories apoplectic.

Yes, reform of party funding so that fat-cat union bosses can’t blackmail the labour party anymore, but that also means people like Lord Ashcroft can’t do the same to the conservatives anymore either. The beneficiaries of this will be the smaller parties, like the LibDems, the Greens, etc, with, if not a leveling, at least an improvement to the playing field.

And let’s talk about the left issues some more, things like welfare, education, aiding the poorest, NHS.

Real term funding increases to the NHS, safeguarding that service.

Increase in the tax allowance to Â£10k phased in over a number of years; of significant benefit to the poorest. Increases in capital gains tax bringing it close or equal to income tax levels; essentially a tax on the richest, and another LibDem policy.

The tories turned out to be surprisingly honest and willing to compromise in their negotiations and the LibDems reciprocated. The libdems allowed to abstain, without endangering the coalition, on issue they’d find highly contentious, certainly an indication that both parties are determined to make this coalition stable and durable. Grown up politics instead of the bullying ya-boo politics usually associated with this country. Something it now emerges the Labour party was never prepared to do.

Is all of this brilliant? Some of it yes, some of it not so much, and some I’d rather be without, but at least it’s steps in the right direction. Only a fool would choose to have none of their policies instead of some/many of their policies.

The impressive amount of support for LibDem policies, especially considering the relative sizes of the two coalition partners, clearly vindicates the decision to negotiate with the tories.

The only thing that’s left open is how well this coalition will last and if it can really deliver on its promise. I certainly hope it does.