Can you do good with bad money? 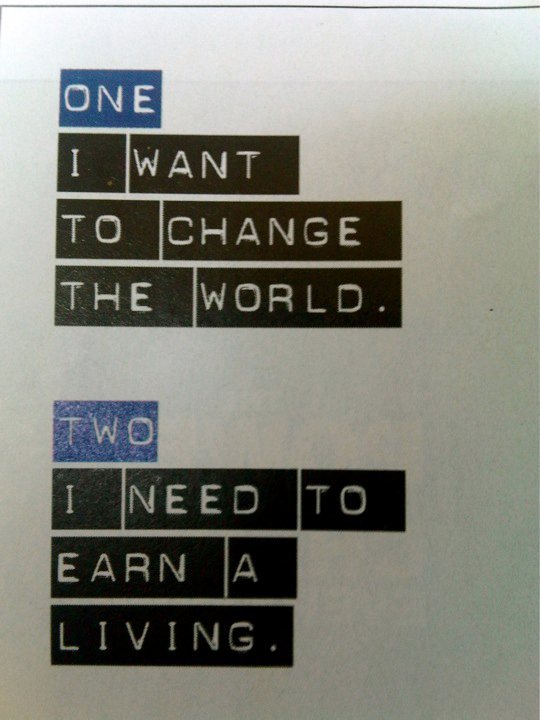 A few years ago I was at drama school, waiting to launch myself into the world of showbiz and being prepped for life out in the â€œindustryâ€. This consisted mainly of being told to lose half my body weight, wear chicken fillets and look either more or less asian (pretty hard for a dual heritage, Anglo-Japanese girl!) but also, more practical tips, like how to audition for advertisements.

Sitting in that particular session, hearing about how advertising corporate brands can end up being the bread and butter of an actorâ€™s life, I asked about principles â€“ how could you appear in an advert for a company like McDonalds, and reconcile that with your principles? I was told that my tutorâ€™s friend had managed to buy a house outright with the money earned from just such an advert – â€œPrinciples, schminciples!â€ I cried, much to the hilarity of my course-mates, and left it at that.

But itâ€™s a question that has stayed with me. For struggling artists, more lucrative jobs such as advertising can end up funding work we might deem more â€œworthwhileâ€. Some might argue that this is an unfortunate, but necessary trade-off. That, to do good, sometimes you need â€œbadâ€ money.

In the wider world, there is a lot of evidence to back this opinion up. With ever-deepening cuts to the arts and consistent under-funding of research, we could assume that there is a lot of work that would go undone without corporate sponsorship. The National Theatre, National Gallery, Tate and countless other cultural institutions are all funded by banks and oil companies. Similarly, at an Earthwatch lecture I went to recently on Forests and Climate Change,Â I realised that the presented research projects had been funded by Shell (a dab hand at creating environmentalÂ catastrophes), HSBC (who have been connected to illegal logging)Â and Mitsubishi. Not exactly a roll call of climate change heroes.

Still, has all this corporate sponsorship managed to do “goodâ€? Some would say undoubtedly so. The National Theatre Â£10 Travelex scheme has gone a long way towards the democratization of our theatre scene,Â making it more accessible to those who traditionally wouldnâ€™t have spent a night at the theatre. And sure, without the sponsorship of conservation and research projects such as those run by Earthwatch, perhaps our planet would be in a worse state than it is now, without the few precious enclaves it has left.

But is this â€œgoodâ€ good enough? Whilst BP celebrates their 20th anniversary of sponsoring the Tate in a couple of weeks, they are busy creating the biggest oil painting known to man out there in the Gulf of Mexico. In the face of this, can we be surprised that new collectives, such as Liberate Tate are springing to up to protest against oil and the arts being bedfellows?

In the end, we have to examine what our definition is of â€œgoodâ€. It seems that sometimes our definition can slip, to encompass â€œthe best that can be expected in the circumstancesâ€. If we stopped to examine what is really going on, perhaps weâ€™d find that the good doesnâ€™t outweigh the bad, that they just cancel each other out, or worse – are we calling it evens when it is tipping the other way?

Check out the Shell sponsored Climate Science gallery opening in November at the London Science Museum, which â€œwill step back from pushing evidence of man-made climate change to adopt a more neutral position.” Or, consider the entertainment industry once again – does George Clooney producing films about media corruption (Goodnight and Good Luck) and the oil industry (Syriana) balance out the fact that as â€œglobal ambassadorâ€ for Nespresso, he has helped sell millions of luxury coffee machines for a company with a pretty dodgy track record? When questioned at the 2007 Venice Film Festival about the apparent hypocrisy inherent of this and his appearing in Michael Clayton, a film about corruption in multinationals, Clooney said “I’m not going to apologise to you for trying to make a living every once in a while, I find that an irritating question.”

But many of us are complicit in these trade-offs â€“ itâ€™s not just celebrities, big companies or art galleries. Many of us know the city banker who is planning on making his nest-egg and then retiring to â€œgive something backâ€. But what if that lifestyle choice isnâ€™t good enough? What if that city banker did more harm working for a company that invests in arms, corrupt governments and oil than he (or she) can ever put right? Can we happily assume that our individual choices all balance out in the end?

I was recently invited to a Facebook group called Making Money + Changing the World. The description reads â€œThis is for people that want to do both – that don’t feel like they need to compromise and are searching for a way that they can do good in the world and live the life they want.â€ It sounds great, but Iâ€™m not sure itâ€™s possible. The same Facebook page calls for applications for Pepsi and Nike-funded social enterprise awards. It seems that, for the moment at least, making money and changing the world does require compromise and you canâ€™t bank in which direction youâ€™re going to change it.

Having said all this, I do hope that this is a temporary double bind that we find ourselves in, that another world is possible. Last year, the Co-op turned down Â£100m in un-ethical business and yet total lending by the Co-op soared to Â£8.3bn, setting a better example for our other high-street banks. On a smaller scale, we at The Otesha Project UK have developed a donor screening policy which outlines who we will and wonâ€™t take money from, based on their social and environmental credentials. This led to a super-satisfying encounter with Shell, where I could tell them where to go! I am incredibly proud of this policy because as time has gone on, I have realised how rare it is.

And now I shall leave you with a quote from Terrence Howardâ€™s character in Hustle & Flow: There are two types of people: those that talk the talk and those that walk the walk. People who walk the walk sometimes talk the talk but most times they don’t talk at all, ’cause they walkin’. Now, people who talk the talk, when it comes time for them to walk the walk, you know what they do? They talk people like me into walkin’ for them.


Can you do good with bad money? http://tmponline.org/aD


@call4news my blog now up on tmponline – can you do good with bad money? http://bit.ly/cwey7m


@liberatetate gave you a shout out in my blog! http://bit.ly/cwey7m

Tweets that mention Can you do good with bad money? | TMP Online -- Topsy.com


The fabulous @hannathomas has written this lovely piece: Can you do good with bad money? http://bit.ly/9DQFa8 #bp #Climate #co-op #corporate


RT @caspertk: The fabulous @hannathomas has written this lovely piece: Can you do good with bad money? http://bit.ly/9DQFa8 #bp #Climate …


RT @caspertk: The fabulous @hannathomas has written this lovely piece: Can you do good with bad money? http://bit.ly/9DQFa8 #bp #Climate …


@hannathomas I loved this: http://bit.ly/9DQFa8 Thank you for writing it


You should totally post a link to this article on the facebook group that you mentioned, and re-post on whatever social/environmental blogs that you can.


RT @TopsyRT: Can you do good with bad money? http://bit.ly/bKQjLq Great article! << @newscientist please get Hanna to write for you!


Can you do good with bad money? Hanna T asks a very good question! http://bit.ly/cwey7m


RT really interesting article by @hannathomas: can you do good with bad money? http://bit.ly/cwey7m


RT @andy_lulham: really interesting article by @hannathomas: can you do good with bad money? http://bit.ly/cwey7m

Can you do good with bad money? « hannamade


[…] This is cross-posted from The Multicultural Politic […]