The Thai Uprising for Democracy & the Criminalisation of Dissent

After 10 weeks of sustained protest, violence and flames on the streets of Bangkok, it appears that anti-government dissent was seen to be decisively crushed. On 19th May 2010, the Thai government had announced that law and order was finally being restored. The anti-government protesters had relented rationalising it by claiming to prevent further loss of life, their demands ignored and the current Thai government remained intact. 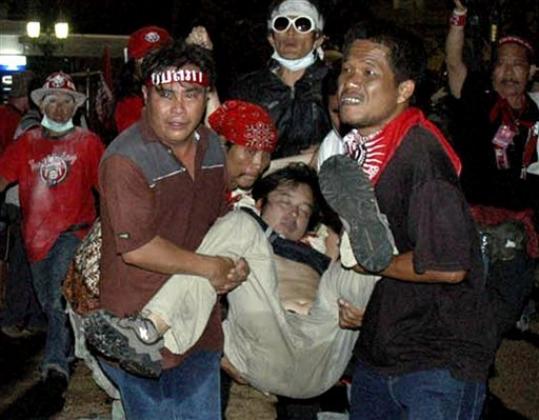 Protesters carry Hiro Muramoto, a Japanese TV cameraman who was shot and killed in in Bangkok (AP Photo)

Many could conclude that the political crisis in Thailand has finally come to an abrupt though bloody end. However nothing could be further from the truth, rather than quelling the United Front for Democracy against Dictatorship (UDD), commonly referred to as the “Red Shirts”, the uprisings has spread throughout the country with at least 22 provinces recording anti-government protests in both violent and non-violent ways.

The popular demands for immediate elections and an end to state oppression in Thailand have gone beyond the UDD into new forms of resistance to autocracy both within Thailand and internationally. The situation in Thailand often has the complexity of the political crisis abstracted out, with mainstream media outlets focussing somewhat irresponsibly on just salacious events and not sufficiently on context, the political troubles in Thailand could be seen as a dangerous game between the Reds versus the government or the Yellows versus the government. In order to understand what has happened and is happening some historical analysis is needed, so that those who have lost their lives in the recent violence can be properly contextualised.

Unfortunately the recent tragic set of events represents yet another dark chapter in the turbulent story of the Thai peoples’ struggle for democracy in Thailand which spans over 80 years.

As dawn broke on 24th June 1932 in the then Kingdom of Siam, an elite group composed foreign educated Siamese civilians and a section of military officers called Khana Ratsadon (“People’s Party”), successfully executed a bloodless coup. The coup dâ€™Ã©tat leaders within a few hours had ended 150 years of absolute monarchy and changed Siam into a constitutional monarchy oriented towards democracy though the King could still appoint half of the National Assembly.

After the pioneering elections, a radical economic plan was produced to nationalise large sections of the economy, this was met by two royalist coup attempts. The constitution of 1932 also stated the people not the monarchy held sovereign power however this remains a promise to be fulfilled rather than a guarantee to be upheld.

Since then Siam has become Thailand and without going into excessive detail, there has been no less than 28 coups and uprisings since the start of the 20th Century, with three popular uprisings happening in this century before 2010, the bloodiest being in May 1992, when a military operation that saw 48 protesters shot dead in the streets of Bangkok. Since 1932 the people of Thailand have had to face 18 constitutions and 27 Prime Ministers – most of them military generals.

In the 78 years since 1932 only one elected Prime Minister has managed to complete a full 4 year term of office – the now convicted fugitive Thaksin Shinawatra. Thaksin, former leader of the Thai Rak Thai (TRT) or â€œThais Love Thaisâ€ Party and a telecommunications billionaire whose political office been compared with Silvio Berlusconi.

It is worth mentioning what brought his Premiership and government to an end. In February 2006, a former Thaksin ally-turned-bitter rival Sondhi Limthongkul, a media tycoon formed a movement he called the Peopleâ€™s Alliance for Democracy (PAD) also known as the â€œYellow Shirtsâ€, yellow being the royal colour of the King Bhumibol Adulyadej. It was initially composed of mostly middle class, right-wing Bangkokians with the sole aim of removing Thaksin from office,Â PADâ€™s main rallying point was calling for royal intervention in appointing a â€˜cleanâ€™ leader and cabinet. 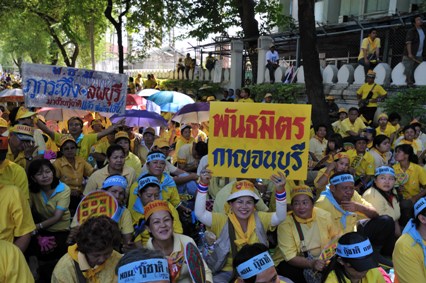 PAD soon became aligned with several industrial unions, human rights groups and later the main opposition; the Thai Democrat Party who counter-intuitively are monarchist conservatives. The only obstacle PAD had was that Thaksin being a populist was genuinely popular not least due to the Thaksin government delivering the first universal healthcare scheme in Thailand. In 2005, 56% of the electorate voted for Thai Rak Thai Party whilst the Thai Democrat Party achieved only 16% of the vote.

So rather than trying to mobilise a popular vote against Thaksin, the Democrats boycotted the snap 2006 general election. Unsurprisingly TRT won the election and so PAD took to the streets and the political crisis ended in yet another military coup. After the military coup in 2006, Sondhi was satisfied that PAD was no longer needed despite the undemocratic nature of Thaksinâ€™s removal.

Another year, another election and in 2007, the new Thaksin aligned parties won the post-coup elections and vowed to revisit the junta leaders new constitution for Thailand. So PAD once again took to the streets in 2008, infamously squatting in Phuketâ€™s and Bangkokâ€™s airports thus reaching British news channels because of stranded Brits in Thailand complaining about the inconvenience of being in holiday during a political crisis. Amongst Peopleâ€™s Alliance for Democracyâ€™s demands was a â€˜new democracy, new politicsâ€™: 70% of MPs should be ‘good people’ appointed by â€˜good peopleâ€™, and only 30% should be elected! During 2008, the UDD was formed as a response to PAD and to defend the fragile elected government, it was clearly composed primarily of Thaksin supporters and engaged in street battles with the â€œYellow Shirtsâ€ leading to the death of at least one person.

PAD once again got what it wanted though this time the coup was delivered through the judicial system. On 9th September 2008, Prime Minister Samak Sundaravej also known as â€œthe Cookâ€ was dismissed by the Constitutional Court for receiving payment for going on cookery programmes whilst in office. Once Thaksinâ€™s brother-in-law took over the Premiership, PAD took to the streets again and in December 2008, the Peopleâ€™s Power Party were ejected and banned from office by the same Court on electoral fraud charges. PAD wound up protests once the Democrat Party took power. 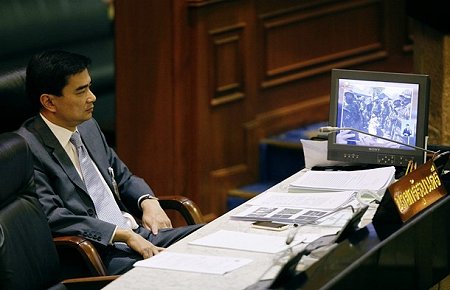 “Iâ€™m ready to become a prime minister who adheres to the principles of good governance and ethics, not authoritarianism.” â€“ Abhisit Vejjajiva, leader of the Democrat Party, 25th February 2006.

It is arguable that the red shirts of UDD are the Thaksin equivalent of Sondhiâ€™s yellow shirts and also the yellow shirts have had trade union backing; whilst the UDD are have urban but primarily rural poor support. PAD campaigned to unseat elected Prime Ministers and curb democratic freedoms, UDD has campaigned for democracy (though admittedly it favours Thaksinâ€™s populism) and to seek the removal of unelected Prime Minister who has sanctioned the shooting of Thai civilians and also setup an aggressive internet censorship agency and also declared a state of emergency in the capital city and many other provinces.

On Tuesday 18th May 2010, Junya Lek Limprasert, founder of Thai Labour, a workers’ rights campaigning organisation, sent an email to set of activists and socialists asking for 20th May to be a day of action in solidarity with the people of Thailand. She wrote for this day of action not to be in alliance with the United Front for Democracy against Dictatorship that had led the anti-government protests, nor with the Democrat government led by Abhisit but rather with the people of Thailand that were caught up in the violent struggle and deserved democracy.

We responded by forming what is now called The International Solidarity for Thailand Campaign (IST), we consist of trade unionists, NGO and anti-sweatshop organisations, and student activists, and want to see the political crisis in Thailand resolved peacefully.

The response to Junyaâ€™s call has been humbling, we have received messages of solidarity and witnessed protests and demonstrations in Melbourne Australia, Indonesia, Hong Kong as well as here in the UK. We are not aligned with Abhisit nor Thaksin, and we abhor violence as a legitimate method of protest. 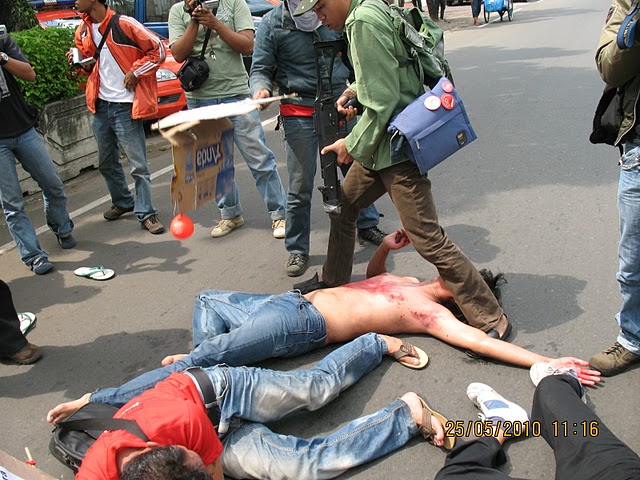 We have four demands:

Several members of the European Parliament have spoken in agreement with the statement that Thai state repression is contemptible and the government must conduct free and fair elections as soon as possible.

We believe the democratic will of the people of Thailand must govern and reject Monarchist authoritarianism. Despite the tragic loss of life, the fervour for change is growing stronger, in a country where both UK and Thai citizens are facing death sentences on flimsy charges or long prison sentences for either criticising or accessing literature that is critical of the King, the democratic fighting spirit of the people of Thailand is both brave and admirable.

Find out more about The International Solidarity for Thailand at: http://bit.ly/thai-solidarity or join our mailing list at: thai-solidarity[AT]lists.riseup.net

An edited version of this article was published last week in The Tribune.


The Thai Uprising for Democracy & the Criminalisation of Dissent http://tmponline.org/QM