Arizona’s SB 1070 law: An affront to US Migrant Rights 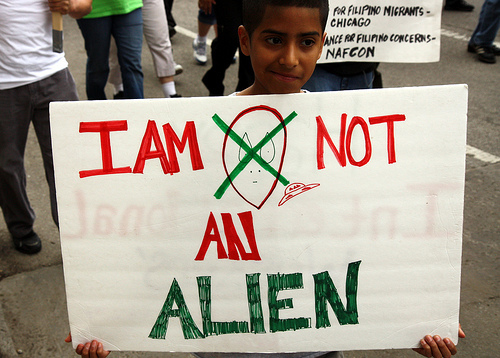 SB 1070 enables police officers to lawfully stop, detain or arrest a person whom they have â€œreasonable suspicionâ€ to be unauthorized, in order to determine the personâ€™s immigration status â€œwhen practicableâ€. It also gives citizens’ the power to sue police officers and departments if they believe that they haven’t investigated a “suspect” undocumented worker thoroughly enough. This law is a charter for racial discrimination.

This law has been met withÂ large protests across the USA and Mexico since May 1st. High profile artists and bands such as Kanye West, Shakira and Rage against the Machine have initiated The Sound Strike, a musician’s boycott of performing in Arizona. President Obama now has the prospect of having to challenge a state law whilst promising to reform immigration law at a federal level.

I used to live at UCIâ€™s campus, one of the several public universities of California located in Orange County. One could not imagine a single day when the streets were dirty or full of tree leaves. Every morning Hispanic workers would be cleaning the streets ofÂ Southern sunny California to keep all of us in a bubble full of guilty cleanness.

I very well remember being stopped by the police whilst driving several times, under any pretext; my Mexican heritage looks definitely would help in the copâ€™s decision to stop me and ask for my documents. Just like it happened to me, in Arizona nearly one-in-ten (9%) Hispanics said they had been stopped by the police or other authorities and asked about their immigration status.

It has now been a month since the state of Arizona passed and signedÂ a law that authorizes local police to check the immigration status of anyone they reasonably suspect of being in the United States illegally.

The law SB 1070, signed on April 23rd 2010 by Governor Jan Brewer (a Republican), has generated a sharp debate between advocates who say it is needed to combat illegal immigration and opponents who say it is an infringement on civil liberties and an invitation towards racial/ethnic profiling of Hispanics by the police. Some say the law will create tensions between police and Hispanics that will hinder general law enforcement. SB 1070, as amended, enables police officers to lawfully stop, detain or arrest a person whom they have â€œreasonable suspicionâ€ to be unauthorized, in order to determine the personâ€™s immigration status â€œwhen practicableâ€.

Even Arizonans could sue the police to force them to comply with the law. This means that if a member of the public sees â€œsomebodyâ€ looking suspicious (hence Latino), and a police officer does not stop him/her to ask for immigration documents, it is lawful to sue the cop for not executing his/her job carefully.

Arizonaâ€™s immigrants must now carry proof of their legal status, and show IDs to police officers who suspect they might be illegally in the US; violators can be fined $2,500 or jailed up to six months.

According to Pew Hispanic Center tabulations from the 2008 American Community Survey, there are 2 million Hispanics in Arizona, representing 30% of the stateâ€™s population. One-third (33%) of Arizonan Hispanics are foreign born. Nationally, there were an estimated 11.9 million undocumented immigrants in the U.S. in 2008. Three-quarters (76%) are Hispanic.

The SB 1070 law will take effect on July 29th 2010. Employers who knowingly or intentionally hire unauthorized workers can lose their state and local business license. Therefore they are forced to use theÂ federal E-VerifyÂ system to check the legal status of new recruits.

Recent national polls â€“ one by Gallup, the other by Pew Hispanic Center â€“ have found that a majority of Americans strongly approve of the state’s immigration crackdown. In fact, some even some think it doesn’t go far enough.

But opponents of the legislation say it will lead to victimisation of anyone who looks or sounds Latino. The head of the Organisation of American States, JosÃ© Miguel Insulza, said: “We consider the bill clearly discriminatory against immigrants, and especially against immigrants from Latin America.”

Legislators in Oklahoma and Pennsylvania have already introduced similar bills to the Arizona law. In Arizona itself, the trend continues. Another law was signed by governor Brewer on 11th of May 2010, prohibiting ethnic studies at Arizona universities, especially those focused on â€œMexican-American studiesâ€.

This is getting even more absurd. It is one thing to racially profile people through laws, (already outrageous), but another to try to annihilate academic programs that educate future policy makers that will try to integrate migrants into society by knowing their cultural origins. Sadly, the fact of trying to keep people in ignorance as an instrument of domination is nothing new.

SB 1070 is not only a step-back for race relations in the US, but also puts the president in a real dilemma about delivering on his original promises towards much wider immigration reform, including some kind of amnesty for the 13 million undocumented migrants – mostly Mexicans – in the country.

Alpha Martell-Gamez is a doctoral candidate in International Migration Studies and Citizenship at the Complutense University of Madrid, Spain under the supervision of Joaquin Arango Vila-Velda and Wayne Cornelius. She is currently writing a doctoral dissertation. Her research particularly analyses Mexican Immigrant Labour-Market and Transnational Social Networks in Southern California.


Arizona's SB 1070 law: An affront to US Migrant Rights http://tmponline.org/bg


The Arizona law makes it clear that there must first be a valid â€œlawful stop, detention or arrestâ€ before any investigation of immigration status can begin. The valid â€œstop, detention or arrestâ€ cannot involve immigration status; it has to be independent, based upon an â€œother law or ordinance.â€ These are quotations from the text of the law.

More importantly, the officer can’t begin to make an arrest, unless the inquiry produces a solid basis, or in other words, probable cause for arrest. And the Arizona law says that ethnicity â€” a person’s appearance â€” cannot be considered as the basis of the reasonable grounds. It doesn’t have to say this, because it’s already the law, but it’s a good thing for Arizona to restate it explicitly.