The Great Bustard thrives in Britain and Holland (allegedly)

News breaks in Britain this morning that the Great Bustard is once again beginning to thrive in the UK. Meanwhile mainland Europe demonstrates once again how remarkable it is for Britain not to have a strong far-right party in its parliament. In the recent Dutch 2010 general elections, The Eurosceptic Party for Freedom (PVV) led by the Islamophobic Geert Wilders, has more than doubled its seats in the national parliament to become the third largest party and possibly soon in government. 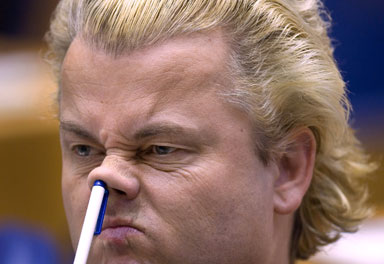 Geert Wilders first gained notoriety for his film, Fitna which brought international attention and was partially responsible for his temporary ban to the United Kingdom. He was eventually allowed to enter Britain to show Fitna at the UK’s Houses of Parliament and was warmly greeted by Eurosceptic United Kingdom Independence Party (UKIP) and grassroots hooligan group – The English Defence League, He was prosecuted (unsuccessfully) by the Amsterdam Appeals Court for ” the incitement to hatred and discrimination”. Mr Wilders has continued to use his right to freely express himself to be a comforting voice of support regarding the Israel Defence Force’s attack on the Turkish nationals on the Freedom Flotilla.

The far right have received a third of the vote in the last national elections in Austria, whilst a nationalist and virulent anti-Roma party, Jobbik are the third biggest party in Hungary and also have received affiliation from a Hungarian Police trade union which has also supported anti-semitic statements.

But it isn’t all bad in Europe, the Icelandic newcomer, the “Best” Party which was set up by comedian Jon Gnarr, has received the largest share of the vote in the capital’s local elections which means Jon Gnarr will become Mayor of Reykjavik. Below is their rendition of a Tina Turner classic.