A New Hope for the Centre Left? 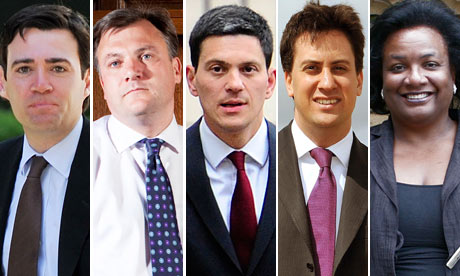 For the ninety-nine percent of the population who are not interested in partyÂ politics, people who are must seem like a religious sect. A dwindling band ofÂ brothers and sisters who think that their leader will lead them to the PromisedÂ Land – or at least a small majority in the House of commons.

Most people rank politiciansâ€™ visits to their homes as slightly more tedious thanÂ the Jehovahâ€™s witnessesâ€™ in the welcome stakes. We have one of the lowestÂ turnouts in European elections and people under twenty-six hardly vote atÂ all. But, political activists are eternal optimists. They find the whole processÂ endlessly fascinating, and the choosing of a new leader is the highlight of theirÂ calendar. Letâ€™s face it political parties are like a sect without the orange robesÂ (the Liberal Democrats wear suits now that their leader has made friends withÂ the other posh boys.
Itâ€™s easy to empathise. I donâ€™t like tennis or cricket, but when we lose the ashesÂ or worse still, it rains and Sir Cliff starts singing on Henman Hill, I sit up,Â take notice and then reach for the remote control. The leaders of our politicalÂ parties are like this too: They impinge on our collective conscience momentarilyÂ when they have sex with Edwina Curry, or “accidentally” claim for unaffordableÂ housing for ducks. The rest of the time we ignore them.
This week I saw the new politics of the centre-left taking shape. It was likeÂ playing a small part in Dickensâ€™ Christmas Carol, (Tiny Tim) meeting theÂ ghosts of Labourâ€™s leadership past, present and future in a short space of timeÂ at the Compass Conference in London, (Compass are a pressure group for the democratic Centre Left) ,and then at the hustings for black and ethnic majoritiesÂ in Leicester.
The past was not present at Compass as Harman was not there, having resistedÂ the temptation to stand for Labour leader. Had she done so she would haveÂ created a vacancy for Deputy Labour Leader and lost both! Her politicalÂ obituary might be the short poem by the comedian Arthur Smith:

Harriet Harman MP for Peckham
Does she live there? What do you reckon?

The present bunches are more interesting. The Miliband of brothers are theÂ very clever sons of a Jewish Ã©migrÃ© Ralph Miliband who argued that thereÂ is no parliamentary road to Socialism. His Social Democratic offspring areÂ living proof that he was right. Their mother must be less impressed by theÂ needle between them over the war in Iraq. David, nicknamed â€˜brainsâ€™ byÂ Alistair Campbell is in the lead and seems relaxed and confident but the longÂ campaign favours his brother Ed who to coin Andrew Rawnsleyâ€™s favouriteÂ phrase, â€˜speaks humanâ€™, and is closer to the partyâ€™s heart and political centre ofÂ gravity.
Andy Burnhamâ€™s unique selling proposition is that he is a working classÂ northerner and was not a special advisor under New Labour. These are theÂ reasons he will lose. Labour is part of the establishment now and its MPs areÂ just as posh as the coalition.
Poshest of the current bunch is Diane Abbott, another product of Oxbridge whoÂ sends her son to Public School but denounced the Blairâ€™s for choosing a veryÂ posh selective state school. The multicultural minibus TMP took to LeicesterÂ was torn between welcoming a black woman on the ticket and the tokenism thatÂ got her there when David Miliband lent her his supporters. She offers no policyÂ and her platform is a mixture of cringing self-indulgence, and wearing her longÂ standing disloyalty to her own party as a badge – which means she has an alibiÂ for Afghanistan and Iraq.
Ed Balls sits with the present bunch but belongs to the past as he was GordonÂ Brownâ€™s representative on earth in a previous life. He is a nice man who is notÂ as mad as his eyes make him look. He wonâ€™t win but his wife Yvette CooperÂ would have stood a chance in this family affair. He gives everyone includingÂ himself and me the chance to rehash and old Charlie Whelan joke that â€˜twoÂ Eds are better than oneâ€™.
The future leadership were not in Leicester in or on the platform at either event.Â They were in the minibus and the audience at both events. Part of Labourâ€™sÂ problem is that it is always waiting for a leader to change society on our behalfÂ without us having to join in. From Martin Luther King Junior to Barack HusseinÂ Obama, history teaches us another lesson.
Compass advocate a politics in which people should be the change they wantÂ to see. Three people who embody that message and whose lives illustrate itÂ spoke one after another; Jon Cruddas MP (see Fabius with a Compass) who is the BNPâ€™s worst nightmare made flesh. Jon would not run for theÂ leadership but will one day be Deputy Leader. When he is you will know thatÂ Labour finally, â€˜gets itâ€™.
He was preceded by TMP founder and new Member of Parliament for Streatham, ChukaÂ Umunna who is, as yet, inexperienced, but has been compared to Obama. On the same platformÂ that afternoon, Oona King, the former MP for Bethnal Green and Bow, she declared that she isÂ challenging Ken Livingstone to be the Labour candidate for Mayor of London.
Whoever the next Labour leader is, those three represent the future, but they canâ€™t do itÂ without us!


A New Hope for the Centre Left? http://tmponline.org/wo


What a bitter hatchet job on Diane Abbott. The poshest of the bunch is the daughter of a Jamaican welder and a nurse. If I wanted to play your game I could just as easily spew out vile about Jon Cruddas and the times he has voted against the party or about his choices for his children’s education. Such petty sectarianism in your post is not needed, please act your age.