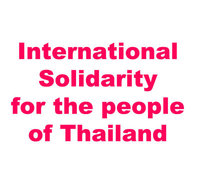 As long as injustice continues and the Abhisit government continues to act with impunity we will campaign against them. It is laughable and a mockery for the UN to unanimously elect Thailandâ€™s ambassador in GenevaÂ to be head of the Human Rights CouncilÂ this week.

The UK section of the International Solidarity for Thailand Campaign is holding their second open planning meeting onÂ Monday 28th June 2010 from 6pm to 8pm.

The situation in Thailand hasn’t died down but instead worsened since the bloody climax of the military crackdown.

Many people both of Red shirt affiliation and of none are being imprisoned for accessing political websites and newspapers.

We have campaigned against the government and not for Thaksin and seen one of the many political prisoners, an academic, Dr Suthachai Yimprasert released. We have built alliances across Europe, Asia and also in Australia as well as Thailand. However we need to deepen and broaden our bases in the UK.

Amnesty has noted the criminalisation and censorship of the free media/press but there isn’t a campaign.

We will be planning to support a book launch taking place later in the week and also holding actions throughout the summer.

More suggestions of direct action in solidarity with those fighting against authoritarianism and censorship. Bring your thoughts, criticism, suggestions and friends.

Solidarity with the people of Thailand

Where are Talha and Babar now? 16 May supermax UK film premiere + Solitary Watch + Amnesty International
May 1, 2013