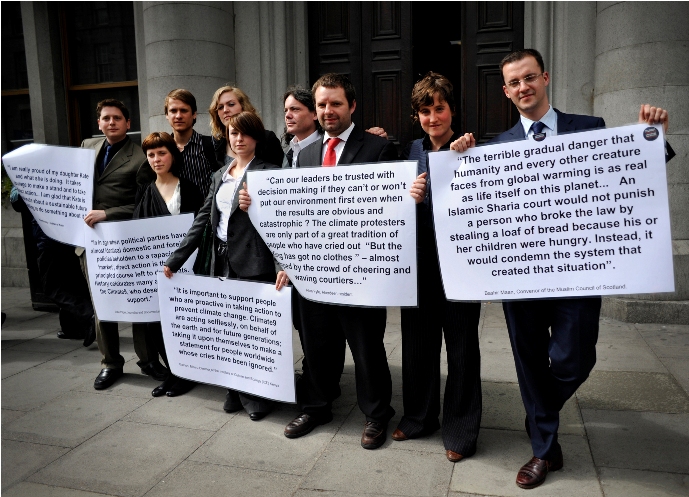 Nine protesters who shut down Aberdeen airport in March last year have been found guilty of breach of the peace. The charges were significantly reduced over the course of the two week trial, with all vandalism charges being dropped.

The jury in Aberdeen – the oil capital of Europe, were the first to hear evidence from climate scientists on the need for action since the failure of the Copenhagen talks.

The nine are celebrating their victory in showing that peaceful protest is a necessary and legitimate way to take the action needed on climate change. Expert witnesses gave evidence on the desperate need for more radical emissions targets and called for the actions of ordinary people to prevent greenhouse gas emissions before its too late. These statements were unchallenged by the procurator fiscal after Judge Colin Harris referred to the overwhelming scientific agreement that climate change is anthropogenic.

â€œAt present I see little evidence that governments at all levels are taking sufficient action on climate change. Therefore, like those who have committed civil disobedience in the past I believe that groups such as Plane Stupid must take every opportunity to bring the urgency of climate change to the public attention.â€

The court watched video evidence from the protest in which defendant Dan Glass stated;

â€œThis is not a media stunt, this is about stopping carbon emissions. We want to close the airport for as long as possible; to stop C02 emissions as they are dangerous; to stop airport expansion; to highlight the social disparity between those who cause the problems and those who suffer the impacts.â€

In the face of trumped up charges by the state, which barrister Frank Gallagher described as ‘complete and utter overkill’ the nine defendants have received statements of support from all over the world. These included documentary film-maker John Pilger, villagers displaced by climate induced flooding in India, faith leaders, public health experts, grandparents, and most recently from Michael Mansfield QC.

Speaking after the trial, another of defendants Tilly Gifford said:

â€œWe set out to show in court that policies such as the aviation white paper contradict what the science demands. Now that the court has heard expert witnesses testify to the imperative need to cut emissions, they are mandated to prosecute the real criminals, the corporations who are profiting from polluting.”