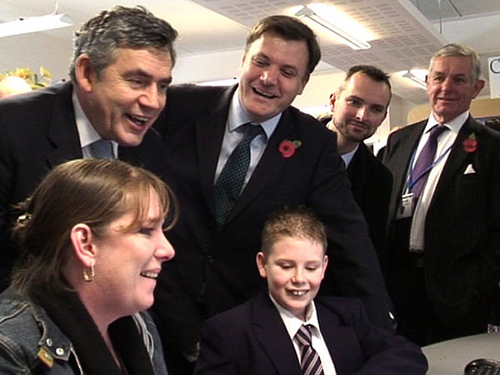 Gordon Brown and Ed Balls at the City of London Academy

From 2004 to 2008, I attended the City of London Academy in Southwark, one of four Academies sponsored by the Corporation of London; the others are in Camden, Islington, and Hackney. The main subject focus of the school was therefore Business studies, regardless of the fact that it was neither a required curriculum subject nor studentsâ€™ desire to actually study business, and students were also required to take the mandatory Business GCSE, again, regardless of student needs or wants.

In addition to the educational favouritism, the school also had a token amount of students who actually lived in the City, and they were provided with minibuses to ferry them to and from school every day, whilst non City students had to take public transport â€“ even when it was quite late at night after clubs and detentions, there was no consideration for the younger students who were made to travel on buses through rough areas as late as 9PM. Uniforms were also expensive, up to Â£90 for a blazer, and a requirement for leather shoes, once again, not a problem for the City kids, but a large investment for the families of students in poorer areas which made up about 95% of the school population, including myself.

For the first two years of the schools existence, it was housed in a sizable complex of portacabins, first on the grounds of Waverley School (now Harris Girls Academy) in Peckham, and for the last year, on what would become the completed buildingâ€™s football pitch. By the time it was moved to Bermondsey, the population had doubled, and was far too small for 300 students and 100 staff, in addition to this, it was often freezing cold in winter, or boiling hot in summer, and after a year of use, was incredibly tatty on the inside, with only two sets of toilets for males and females, these often became disgusting to the point of unusable as so many people had to use them. No attempt to improve the facilities was ever made, even after numerous complaints.

The lack of facilities or care on this matter has to be the responsibility of the overall management of the school, which was appalling. They werenâ€™t referred to as â€œheadsâ€ or â€œdeputy headsâ€ in day to day parlance, they were the â€œSenior Management Teamâ€, in addition to this, the school employs â€œheads of yearsâ€, these roles are not teaching roles, but another subsection of the management. This is a school, not a business, although the levels of micromanagement would lead people to believe otherwise.

I hated it there, I hated the disorganisation (GCSE students work was routinely lost, resulting in poorer than deserved results), the way badly behaved students were provided with so many resources and benefits whilst the students who actually wanted to achieve were set aside and had to suffer for it, and those students with genuine problems such as ADHD, were excluded. No help, no support, just exclusion. I have no doubts this was to keep the records looking good.

The ConDem academies program must be stopped, this is not the way our future should be taught, this serves to damage their confidence in the education system, and will leave them seriously struggling at GCSE time and the beginning of their adult life.

NASUWT & Anti-Academies have called for a lobby of Parliament on Monday 19th July 2010. For more information visit here: http://www.antiacademies.org.uk/Home/opposing-the-academies-bill/protestonjuly19th


Sounds like you had a bad time at that school.
My school was made into a performing academy; and featured a revamp under the BSF project. Because not everyone wanted to do a performance subject like Music, Drama or Dance, it was made compulsory that you took an Art & Design course – from either Digital Photography, Fine Art, Food Tech, Graphics or Textiles. Luckily for me, I enjoyed Fine Art, so this rule didn’t impose much on myself, but I knew a few people who did not want to do Art & Design course.

It was also kind of compulsory, but not written down law of the school, that you had to take a humanities subject, i.e. History or Geography. I took both

The school benefited from being made into a performing academy; however, alot of money was focused on building a new performance area and after a year it was falling apart! It was a shame, it was an amazing new block to the school aswell.


Thanks Daniel, I took RS for my humanities subject, which was very good surprisingly 😀