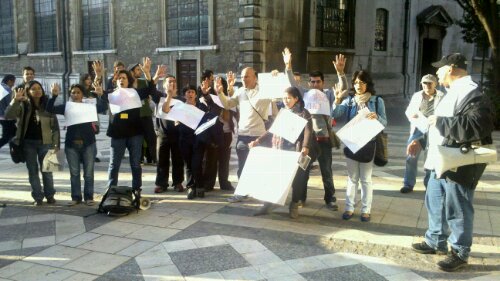 Report on strike and picket by cleaners at Guildhall (City of London) in protest at late and unpaid salaries going back months.

On Friday 15th July we met at 5:30am at Guildhall. Many people went to give solidarity, and the cleaners, who work for the subcontractor Ocean Contract Cleaning, shouted slogans such as “No pay, no work”. They painted their hands with the word stop and with their hands up shouting “Stop the Abuse.”

The police approached us and told us we could not protest in an undercover area immediately facing the reception, but we could do so outside in front of the art gallery because it was a public space. Solidarity came from cleaners from other sites, Colombian solidarity campaign, UCL and SOAS workers and students, Unison, and representatives from other IWW branches. The local priest offered coffee and use of the church toilet to the strikers and their supporters.

After 8am the Guildhall management who hire Ocean called us in to negotiate with them and Ocean, the. Two workers and two IWW union representatives went in. Guildhall asked us to move the demonstration, supposedly because it was private property (unlike what the police had told us earlier). In order to facilitate the negotiation and with the approval of the workers the demonstration moved to the street entrance to the Guildhall.

People remained firm and resolute, always chanting and singing. This clearly irritated the Guildhall management, who sent representatives to invite us to go and wait inside a conference room and stop the protest. The workers refused and continued shouting slogans in Spanish and English. Over five hours after the picket began and long negotiations, Ocean finally provided us with evidence that they were solving the problem of unpaid wages, worker by worker and with figures. We took this to be a small victory. The best thing about this protest was the determination and unity of the workers – despite intimidation from managers they remained solid throughout.

This is just the beginning of this struggle. The workers, currently paid the minimum wage, are determined to go on to fight for the living wage. Thanks to all who supported us, both at the protest and with solidarity messages.