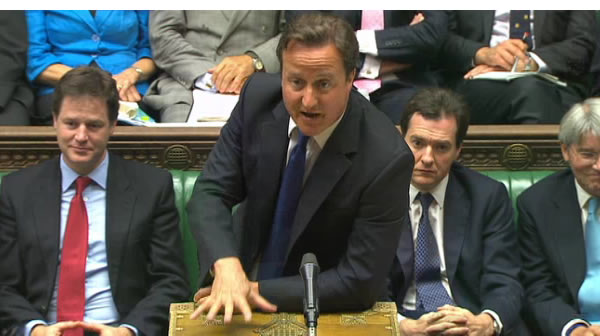 In case you missed today’s emergency Prime Minister’s Questions and statement on the riots. Here is our irreverent summary on PMQs each q&a is tweetable.

These are not quotes nor should be taken as an accurate representation of their views. This is (weak) satire.

Cameron statement in summary: It is criminality but the context is broken britain, lets marginalise youth further and evict bad families.

Ed Miliband’s statement in summary: What role can the army play? We need more CCTV. Children deserve a better future. << under surveillance!

Jack Straw: We need more police and more prisons! Don’t close any of my prisons!
Cameron: You are chatting shit.

Hazel Blears: This was violent criminals. Will the PM back the police to crack skulls.
Cameron: I will but it is for police to decide when to do it.

Nick Du Bois: Get the teachers to finger the little shits to the police.
Cameron: It should be parents that grass their kids.

Kaufman: Let’s not write off these kids.
Cameron: I agree but next time not now.

Dorries: The police should have used bullets and water cannons.
Cameron: They can if they want.

Vaz: I love the police. Let’s give them more money.
Cameron: We will pay out if we must.

Louise Ellman: Liverpool should re-elect me. What will the PM do for Liverpool?
Cameron: We will compensate Liverpool in full.

David Miliband: No riots in my town cos the police are amazing. Why does Cameron want the police to stand for election?
Cameron: Err… why not?

Stella Creasy: Walthamstow loves the police. We’ve got great community workers, they should be paid.
Cameron: You are right… but we don’t have money, let’s demonise bad parents instead.

Lewisham MP: These shits are putting videos glorifying their loot and weapons. Shut them down.
Cameron: We will work on it.

Pritchard: Cut on council workers perks not police numbers.
Cameron: No, we will make cuts everywhere.

Abbott: No to water cannons and rubber bullets.
Cameron: We didn’t use any. Be grateful.

Shearman: Don’t leave it to parliament to sort it out. We need an inquiry.
Cameron: Don’t be a pussy. We can do it.

Wicks: Croydon is a warzone. The kids are fucked up. We need more police.
Cameron: I know people are pissed. The police were lazy not lacking numbers.

Andrew Smith: These parents need a slap.
Cameron: The schools should sort the kids out. I blame the fathers.

Margot James: The PM is right about cuts. Stick at it.
Cameron: Thanks you are right.

Hoey: Parents are the gangs as well.
Cameron: We’ll make sure we get them. I’m setting IDS on it.

Goggins: I love the police. Ban people from Manchester
Cameron: Hmm.. maybe. I think the police are great but they fucked up.

Leslie: Public sector workers did a great job. Don’t cut them.
Cameron: It’s Labour fault. I have to, look at the US.

Jackson: We need to bribe people to get married.
Cameron: You are right.

Michael: Parliament can’t do it, we need an inquiry
Cameron: Don’t be a wuss.

Treddnick: The Police are scared after G20. Back them to bludgeon heads.
Cameron: I do.

Stuart: Have we got enough prison places?
Cameron: Erm… I think so?

Tom Watson: This is the start of a new criminal class. Stop the police cuts.
Cameron: The police need technology not more bodies.

De Piero: CCTV is great. We want more.
Cameron: I’ll give you money for it.

Buckland: Make the rioters pay even if they are penniless.
Cameron: Great idea, let’s confiscate their cash.

Umunna: The rioters were not all black.
Cameron: True.

MP: Shouldn’t the rich be a bit less crass with money.
Cameron: I’m not at all.

MP: No freedom in chaos. We need more CCTV and police.
Cameron: CCTV is great and the police are ok.

Buck: Community police shouldn’t be cut. You fuck.
Cameron: You are talking out of your arse.

Keeley: We had to bus police officers in. Stop the police cuts.
Cameron: Nahnananah I can’t hear you.

Robertson: You took scottish police from us.
Cameron: So?

Sutcliffe: Why cancel the football now?
Cameron: We won’t anymore except for Tottenham.

Labour MP: Stop the police cuts.
Cameron: You look like a joke.

Metcalfe: My business was hit by these wankers.
Cameron: You can claim compensation from us.

Green MP: Inequality is a deep problem. Stop the cuts.
Cameron: Riots have nothing to do with it.

Hancock: The police were caught asleep in my area.
Cameron: Police need to fix up.

Byles: These yobs need to be taught a lesson.
Cameron: We need to scare the shit out of them.

Burrowes: Ken Livingstone is dickhead isn’t he? Slash police paperwork.
Cameron: We will liberate the police.

Jim Sheridan: You English are a bunch of thugs. Praise Scotland.
Cameron: Thanks Scotland.

Ashworth: Age Concern was hit by these feckless fucks. Help them
Cameron: Terrible, we will.

Efford: The EDL were exploiting this.
Cameron: Yes, I hate those wankers.

Hames: We need a commission into this.
Cameron: No.

Rushanara Ali: Ban the EDL from my yard!
Cameron: We will try.

Morris: Stand up for law and order.
Cameron: We will take back the streets.

Amber Rudd: Hastings was full of rumours on twitter but nothing happened.
Cameron: Social media is like ying & yang. For good and evil

MP: Aren’t we going too far?
Cameron: No! Misbehave and we’ll make you homeless

MP: Do we need the police cuts?
Cameron: FFS… YES!

Lee Scott: Let the police do what they want.
Cameron: We have and its great.

Heald: Punish everyone of those fucks, let victims moan at them.
Cameron: Great idea.

Gardiner: London doesn’t want the police cuts.
Cameron: You are wrong, they love me.

Reckless: Cut the quangos on sentencing.
Cameron: You are on to something…

Tory MP: Shouldn’t the compensation money be spent on policing?
Cameron: What bollocks.

Tory MP: Austerity should teach these chavs a lesson on saving.
Cameron: That’s what we are pursuing

Burley: If any Johnny Foreigners were rioting, we should send them back!
Cameron: True, very true.

And it went on and on and on…

PMQs Minus The Bullshit – Forget Marx, Ed Miliband is loving Engels instead
November 27, 2013

PMQS Minus The Bullshit: Is Michael Meacher on Crack?
November 20, 2013


The reason most people rioted was not because they had become unusually greedy, but because they have become accustomed to a life unrestrained by adult authority â€“ parents, teachers, neighbours â€“ or by social conventions.

Britainâ€™s riots are the consequence of a greedy society. The culture of greed and impunity we are witnessing on our TV screens stretches right up into corporate boardrooms and the Cabinet. It embraces the police and large parts of our media. It is not just its damaged youth, but Britain itself that needs a moral reformation.
Ia
http://www.londonschoolofislamics.org.uk