UPDATE – This event has been cancelled due to a victory 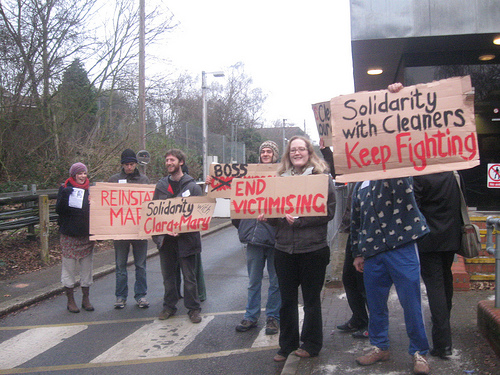 Activists supporting cleaners against victimisation and bullying by managers

A statement has just been released by the Industrial Workers of the World (IWW):

Following negotiations with the cleaning contractor LCC, who covers
contracts at the prestigious Heron Tower – the IWW Cleaners and Allied
Grades Branch has secured significant gains to the benefit of our
low-paid.

The IWW had launched a campaign to secure full payment of the living
wage Â£8.30 per-hour for, a resolution of staff shortages, issues of
unfair dismissal and anti-union conduct by management.

The IWW has reached an agreement which has secured full-payment of the
London Living Wage with back pay until May 2011, the staff shortage to
be filled and confirmation of the trade union rights of workers.

Further discussions are underway on a recognition agreement with the
IWW.

As result the IWW Cleaners Branch and London Delegates Committee has
cancelled the demonstration called for tonight at the Heron Tower. We
thank all trade unionists and fellow workers for their solidarity and
support.

Once again the independent workers union the IWW has shown that direct
action and solidarity of all union members in support of each other
achieves results in the interests of our members.

The message to cleaners across London is clear â€“ donâ€™t live in fear â€“ get organised!

According to its own website, the recently opened “social centre” that is the Heron Tower has “visionary ideas and innovative features brings great benefits to the tenants and to the cityâ€. Yet the cleaners who work in the â€œtallest building in Londonâ€ endure low pay, bullying and hypocrisy.

On 2nd May, this year, the â€œLondon Living Wageâ€ hourly pay rate was set by the GLA at Â£8.30, however cleaners working for LCC Support Services Ltd are currently being paid less than this.

In June, workers complaints were ignored until their union, and the Industrial Workers of the World (IWW), intervened. At this point, LCC management accepted the cleaners should be receiving the Living Wage and promised to rectify this.

One month later, the company still have yet to fulfil their promise.

On Monday 1st August 2011, the IU640 Cleaning & Allied Industries Branch of the IWW, entered a collective grievance on behalf of workers who have found out the cost of daring to ask for a decent living â€“ increased workloads and reduced working hours. For cleaners who are already hard working and low paid, this was and is deeply painful.

LCC have so far ignored their employees, met their calls to resolve this legitimate grievance with silence. They have also refused to participate in any collective bargaining procedures. In response to the arrogance of this company, IWW union member cleaners and supporters will rally and demonstrate outside Heron Tower from 5pm, today, Friday 19th August.

It is time Gerald Ronsen, the billionaire owner of Heron Tower and â€œgenerous philanthropistâ€, intervenes, ensuring the workers in his building receive their fair share of the so-called â€˜great benefitsâ€™ this building has promised London.

There will be banners and placards of the IWW Trade Union IU640 Cleaning & Allied Industries Branch and opportunity for photos.


Via @LondonIWW http://t.co/TQTv1le Everyone should read this. An inspirational example of organising. Join a union. Join the IWW


RT @sabcatprinting Via @LondonIWW http://t.co/8LkClhr Every1 shld read this inspirational example of organising. Join a union. Join the IWW


[…] August 2011 IWW secured a significant success on the London Living Wage for cleaners at Heron Tower and in defence of victimised staff. Since the […]