UK Government to cut off water supply to Traveller Community

As the launch of Camp Constant on August 27th approaches, the authorities appear poised to blockade Dale Farm. 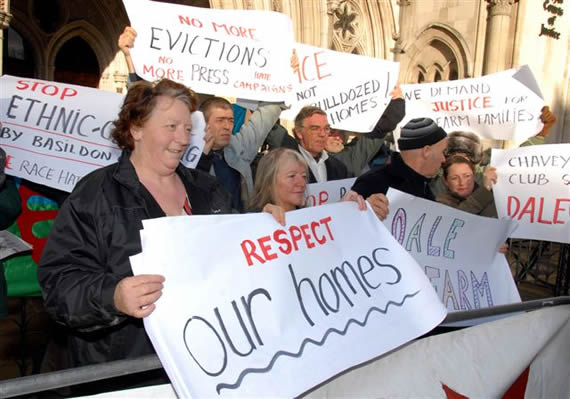 WATER AND ELECTRICITY TO BE CUT
The Council have released information that they intend to cut water and electricity supplies from Dale Farm after the eviction notice period expires on midnight 31st August. This will leave sick, elderly, young, and pregnant residents without access to water or electricity. Amnesty International have condemned the removal of vital water and electricity in these circumstances, and asked their supporters to put pressure on the council to cease this action which represents a serious violation of human rights. An injunction has been sought in consideration of two residents who are dependent upon a constant electricity supply for nebulisers, without access to which their lives are placed in serious jeopardy. See Amnestyâ€™s Kartick Raj speaking to BBC Essex this week.

DESPERATE PLEA TO UN
Richard Sheridan as president of the Gypsy Council has been involved in eleventh-hour negotiations with the UN Commission on the Elimination of Racial Discrimination in Geneva; the Special Raporteur has already entreated the UK Government to cease the evictions and to ensure the families at Dale Farm are offered viable culturally appropriate alternative sites. Lord Avebury will accompany Dale Farm residents to 10 Downing Street on Thursday, 25th August to present a petition to the PM calling for the eviction to be called off.

CAMP CONSTANT
On Saturday, 27th August, we will launch CAMP CONSTANT a solidarity and resistance camp for supporters of the Dale Farm community. JOIN US. See http://dalefarm.wordpress.com/activity for more information, the long weekends schedule of workshops and a welcome pack.

ROAD BLOCK WARNING
Notices have gone up along Oak Road, adjacent to Dale Farm, saying that the road will be closed to all but residents from Friday, Sept. 2nd. See http://dalefarm.wordpress.com/contact for details. Both ends of Oak Road will be blocked (blocking access via both Hardings Elm Road and Gardiners Lane North). Additionally, the lay by on the southern end of Oak Lane (leading on to the A127; by the white â€˜Basildon onionâ€™ water tower) will be blocked. There will be a no stop zone on the footpaths on the A127 between A176 at Billericay and A132 at Wickford. Residents are feeling under siege, with children asking how many more nights they are going to be able to sleep in their beds. Dale Farm is a big site, so it should be possible to find routes in, but be advised that after Sept. 1, it will be harder to get in, and likely impossible to get vehicles in.

DONATE: use this paypal link to donate some money to the camp.

MAKING THE CONNECTIONS
Workshop, Sunday Sept. 4th, 2pm, Camp Constant, Dale Farm. Freedom of Movement and the Right to Stay! This is the rallying cry for Roma, Gypsies and Travellers and of migrants throughout the world. A common thread of persecution, of forbidden lands, eviction and deportation connect the struggles for migrant rights and the rights of Gypsies and Travellers. These realities have met dramatically in the crack-down and deportations of Roma people from France and Italy. Come to the Workshop organised by No One Is Illegal and London No Borders including speaker who is an activist in Amnesty International’s campaign against the persecution of Roma in Europe.

TELL EVERYONE ABOUT THE DEMO
Sat, 10th Sept, 1pm, see here for more information and email: savedalefarm[at]gmail.com to add your groupâ€™s support to the listâ€¦

RISE UP!
We cannot stand by and do nothing while the UKs largest Travellers site, home to hundreds of families, including many children, elderly and sick residents, is brutally evicted. Travellers should not have to live in constant fear of eviction with their lives and communities under constant threat. They should not have to be forced out of their homes and off their land by bulldozers and police. This constant hounding, marginalisation, and lack of provision is how rural England does ethnic cleansing. It is time for a resurgence of support for Gypsy and Traveller communities.


UK Govt to cut off water supply to Traveller Community http://t.co/sIwpBot This makes me so ashamed of this country. Stop the eviction! RT


It might be a good idea for the Gypsy community to have some respect for other peoples’ property before I can find one ounce of sympathy for them.


These so-called ‘travellers’ don’t seem to travel very much. And just because of their chosen way of life, they cannot be defined as an ‘ethnic group’. They are merely scroungers and opportunists milking a generous system.