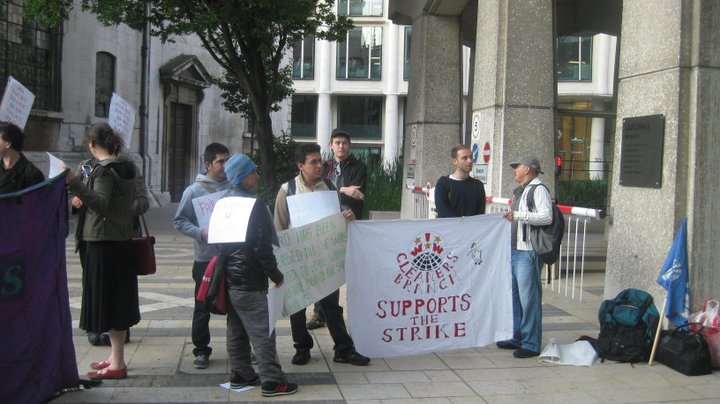 The Cleaners of Guildhall, many of whom are members of the Industrial Workers of the World (IWW), are holding a rally and demonstration at the Guildhall this Friday at 9am. They are demanding respect at work and calling on the Corporation of London and its cleaning subcontractor to ensure they receive the London Living Wage which is currently set at Â£8.30.

In recent months, The Guildhall has shown â€œthe power of Londonâ€™s ruling eliteâ€, is being used to discriminate and bully some of the lowest paid workers in the City. In July, non-English speaking cleaners at protested at The Guildhall with their English speaking co-workers and subsequently won back their pay for unpaid work. This included having their Annual Leave cut due to time off for the Royal Wedding!

This â€œclerical errorâ€ which resulted in many cleaners unfairly having weeks of work underpaid, was just the last of a long list of grievances. Under the previous contractor, Ocean Contract Cleaning Services had received complaints from the Guildhall cleaners of:

The cleaning contract is now moving to Sodexho on the 1st September which means a change in management but with as yet no guarantee of an improvement for the cleanersâ€™ terms and conditions. The cleaners of Guildhall are on poverty pay rates of Â£5.93 per hour, whilst working in one of the most expensive cities in Europe and receiving no sick pay or pension. According to the London Living Wage Unit this is officially â€œpoverty payâ€.

â€œThe Corporation of London must end its hypocrisy on the Living Wage. How can they â€˜highly commendâ€™ the GLA Group for its Sustainability Procurement Award in 2009, but fail to apply those standards to its own procurement now in 2011? Pay these cleaners a Living Wage.â€

John McDonnell MP is supporting the protest on Friday along with a number of prominent trade union officials.