A report from Dale Farm 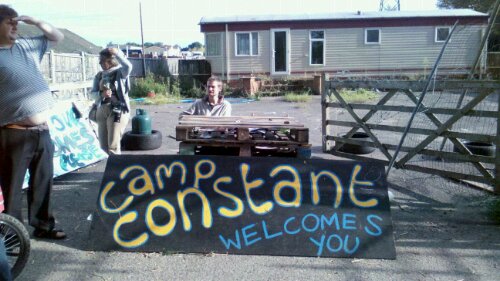 First the government threatened to cut off their water supply and then Amnesty waded in.

Now they are trying to evict the Dale Farm residents and the UN’s office for Human Rights have called on the UK government not to.

When I went there last Sunday, it was evident that it was wealthy neighbouring homes that were at the forefront of opposition to Dale Farm’s existence. The gated estates encasing silver 4x4s were in stark contrast to the humble but welcoming entrance to Dale Farm and Camp Constant.

From my experiences of Climate Camps, I was quite surprised by the small scale of the Camp. A few tents, one for the kitchen, three meeting tents and two compost toilets in a small compound. though it was hard not to be impressed by the scale of work achieved by a small band of activists to set this up plus the scaffolding, they needed much more support.

I arrived in time for an important meeting initiated by a representative of The Gypsy Council of UK and Ireland. She had been processing the emergency injunction in the high court, working with the police and liaising with Basildon Council. She claimed that the police admitted that crime in the local area was no different to neighbouring constabularies and didn’t want to get involved in the dispute because they couldn’t afford it. In her view it was the council who were being unreasonable, but thanks to negotiation and shaming them, the cutting off of water and electricity would not go ahead. She explained how the Council expected the eviction to take 3 – 5 weeks but they had closed the road Oak Lane and had permission to mount an entrance gate on it for a year. The council were prepared for a long battle.

Her strategy was to show that the travellers can accommodate alternatives by identifying the legal plots to move people and facilitate self-eviction from illegal ones. She asked for UN trained human rights observers from the crowd, there were few that had been trained but none by the UN. Strangely she seemed bitterly disappointed by this as her plan, hinged upon this and she claimed that human rights observers would have free access to the site but would not be allowed to intervene and could only document what they saw.

The travellers were distrustful of her optimism in the courts and were proved right. At multiple points in the meeting, they appealed to the activists that they needed them as the council don’t see them as human beings and more of activists that turn up, the better chance they have in keeping their homes. It was dominated by traveller women who offered to open their homes to activists so they wouldn’t have to stay in tents.

One female activist challenged the Gypsy Council rep with the question: “Are you asking us to help you facilitate a peaceful eviction?”

Concerns were raised with the road block and that the Gypsy Council strategy of human rights observers meant handing a list of activists’ names to the police.

After the meeting, I met members of the local Catholic church in Wickford, one woman, Anne-Marie had told me that the travellers were “well integrated, all their children go to the local schools and they are all active in the church especially charity drives for East Africa and the Tsunami”. She saw it as “racism” as these people in her eyes were an asset to the community.


“it was evident that it was wealthy neighbouring homes that were at the forefront of opposition to Dale Farmâ€™s existence. The gated estates encasing silver 4x4s were in stark contrast to the humble but welcoming entrance to Dale Farm and Camp Constant.”

That’s your evidence? The neighbours have nice cars and gates?

I’ve seen pictures of Dale Farm. Some of them have nice cars and walls.


Travellers have a great past as contributors to the changing face of Britain. They used to be news gatherers and sharers of information, now superseded by the tabloid newspapers which gain many readers by using underhand methods – rather like the bankers, they capitalise on peoples misfortunes and make a packet.
Oh why can the council not see that those who live in an unusal way are a bit different but not threatening, instead they have the intelligence to help those worse off than themselves like the Tsunami sufferers in Sri Lanka – because they understand that a generous spirit is more important than showing off wealth and treading on the faces of the poor.


This would be a very different situation, and the support would be far great – IF the travellers had not bought land with no prospect of planning permission for ANYBODY who bought it, same as all the other land of it’s type in and around the green belt for Â£20,000 an acre.

There is a 7 acre field behind my parents house, it has a large area of hard standing, two shed/barn type buildings, and road access. Quite rightly it is protected from development by property developers, locals wanting to build affordable housing for their family, or travellers. That land is also a prime example of Â£20,000 an acre land in the green belt.

I would gladly march alongside Richard Sheridan had he bought land which was properly researched before purchase. It’s far too easy to take any disagreement with the supporters position at Dale Farm and equate it with racism, bigotry, or the claims of ethnic cleansing – but that is simply not the case.