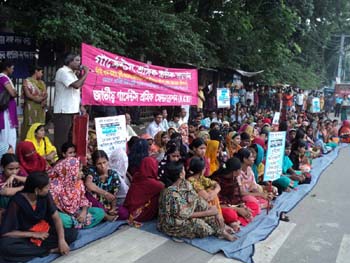 Bangladeshi National Garment Workers Federation (NGWF) organised the hunger strike, which was followed by submission of memorandum to the Ministry of Labour, Government of Bangladesh.

Demanding immediate payment of dues and arrears to the workers of these factories, speakers alleged that the problem was not solved even after submission of grievance petitions and memorandum to the BGMEA.

After the hunger strike program, a five-member delegation led by NGWF General Secretary Ms Safia Parveen submitted a memorandum to the Ministry of Labour, urging the government to take effective action immediately.