Six Arrested During Brief Occupation of Trafalgar Square on #9Nov


By Cristina E. Lozano /Â @CristinaELozano
At least six people were arrested in London after setting up a camp in Trafalgar Square while they were trying to establish a third camp in the city in order to galvanise the general population against systemic injustices in society, and also to remind people about the upcoming November 30th strike, which is expected to be the biggest British strike since 1926. 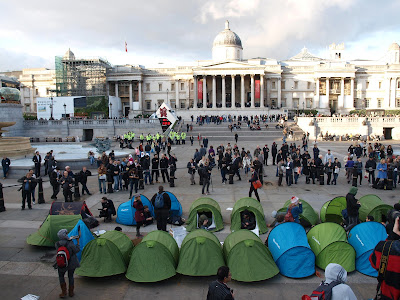 Trafalgar Square before the eviction

After one hour of camping Nelson’s column’s feet, just in front of the National Gallery, Police told demonstrators using speakers they should leave the area. As they did not, agents just entered the camp, which at the time had already more than twenty very well-ordered tents, and started removing its habitants.

In the very beginning, the Police tried to convince demonstrators to leave using just words. However, as people decided to resist peacefully at the place, cops started removing persons by force. Previously, the Police had controlled all the entries to Trafalgar Square. Easily there were two hundreds (or more) agents at the square in that moment. 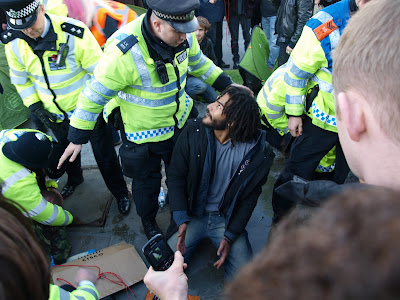 Niel, 27, before he was arrested during the eviction

Surrounded by dozens of cameras, the one hour old camp was evicted. One of the demonstrators shouted in pain as the Police handcuffed him. He said they hurt his hand. “This is [what] democracy looks like”, he added as the officers took him out of the square.

A second demonstrator seemed toÂ have been treated more carefully. The police officers asked him if the handcuffs where too tight after subduing him over the floor. He also asked “What was my crime?”, but he received no answer.

The demonstrators under arrest were escorted into a bus to be taken to a police station, as one of the police officers confirmed. No officer informed them of their rights despite some of them demanding it several times.