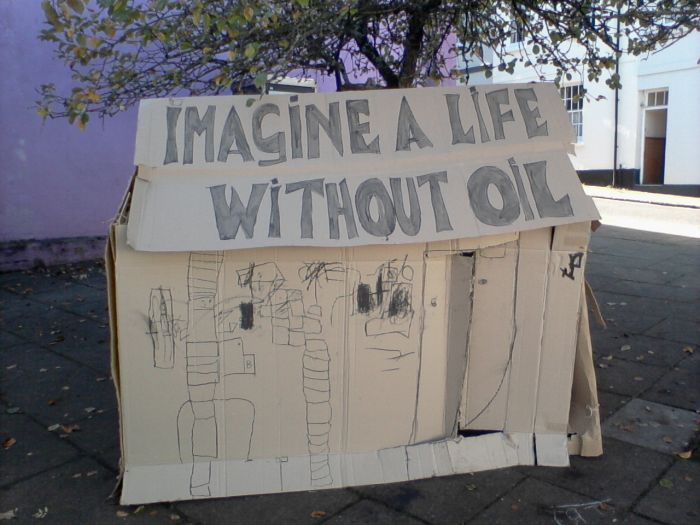 A major criticism that has been levelled at Occupy LSX is that the movement has become an umbrella for too many issues. â€œWhat do they want?â€ our mainstream media asks, as a stroll through the camp makes it clear that democracy and corporate greed are not the only issues being debated. Linger around St. Pauls, or peek your head into the Tent City University, and you will soon find yourself debating and discussing issues of mental wellbeing, gender equality, class, the environment, parenting, and the role of religion, amongst many, many others. However, rather than betray a lack of focus, to me the diversity of topics being discussed means something quite different â€“ that our movements for social and environmental justice are growing up, that we are seeing connections and joining the dots between issues, and that we recognise that we are most powerful when allied.

There is much that we can learn from each other, and the global Occupy / Indignados movement has provided us with the perfect opportunity to compare notes. Whatâ€™s working, what isnâ€™t? Are our demands aligned, and does that even matter? However, there is one area of discussion that certainly needs to be addressed by the environmental and Occupy movements together, and that is â€˜what does transition look likeâ€™? We say that another way is possible, but what journey do we have to take to get there? How can we work together towards building a new low carbon economy, one that incorporates values of social justice, equity, and democracy? Of course this conversation is already well under way in many countries across the world, but different elements of our movement are in danger of pulling in very different directions. You might not think it, but transitioning away from a pollution-based economy and transitioning away from our current capitalist model do not necessarily have to have much in common.

Letâ€™s not kid ourselves â€“ the new, low-carbon economy could be one that retains all of the inequities and corporate greed of our current economic system. One where companies profit from the transition, while workers are stuck in green McJobs, doing the essential work of decarbonising our energy systems and retrofitting our homes but in a vicious circle of low pay and few opportunities for progression or training. Nor does the Anarcho-Marxist model of transition away from a capitalist state make any promises to those who are currently most underserved by our society. The end goal may be distribution of wealth and workersâ€™ rights, but the requisite insurrection and ensuing chaos that it takes to get there may only end up harming those that need the most help. Indeed, members of our unions are concerned that significant periods of economic restructuring in the past have often happened in a chaotic fashion that has left ordinary workers, their families and communities, to bear the brunt. Indeed in the UK, many individuals and communities are still paying the price for the rapid shift away from industrial production over the last 30 years.

Perhaps there is a middle way, one that respects workersâ€™ rights, the rights of the poor, and our planetary boundaries. This is where the idea of Just Transition may come in handy. Just Transition is a framework for a fair and sustainable shift to a low carbon economy, proposed by trades unions and supported by environmental NGOs,Â that seeks to prevent injustice becoming a feature of environmental transition. Just Transition recognises that support for environmental policies are conditional on a fair distribution of the costs and benefits of those policies across the economy, and on the creation of opportunities for active engagement by those affected in determining the future wellbeing of themselves and their families.

The framework is not fool-proof â€“ it does not deal with the capitalism question, nor does it a build a comprehensive vision of a new world. Questions about growth, nuclear, and means of production go unanswered. However, it is the beginning of an essential conversation about how we can create a new system that is both economically and ecologically viable.

What is not questioned is the speed at which we must act. The need to transition away from our current economic and social model in this country and the rest of the developed world is an urgent one. We are experiencing rapidly rising levels of inequality and, according to the IEA, we have only an estimated 5 years before the fight to mitigate dangerous climate change becomes a fruitless one.

Yes, the challenge ahead is immense, but so is our movement. Who would have thought, just one year ago, that the world would be engaged in a global conversation about corporate greed and the terms of democracy? A fair society that respects our earth may seem out of reach, but that is all the more reason to keep striving for it. As David Harvey has said, â€œOf course this is utopian!Â  But so what!Â  We cannot afford not to be.â€

Hanna Thomas is Lead Organiser for the East London Green Jobs Alliance. This post originally featured on The Occupied Times.Â

The problems of the “Girl Effect” & Nike Sponsored Feminism
May 3, 2012
The Island of Sark – a microcosm of Capitalist Representative Democracy
March 28, 2012


Blog post: A Just Transition or Just a Transition? http://t.co/bHGB6LLj