This week’s PMQs translated into tweets

Ever thought, what happens in parliament and what Prime Minister’s Questions is all about? Me too, so here it is in condensed form.Â This week, the controversial Merkozy plans means Europe is on the agenda. 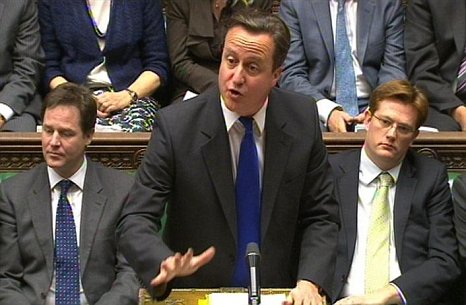 Rosindell: Defend the British interests, show them you are british bulldog
PM: Euro zone is fucking up my plans. I’m a proud xenophobe #pmqs

Ed M: What EU powers will you be bringing back to Britain?
PM: Err.. *waffle waffle*

Ed M: What a load of balls. You lie to your backbenchers!
PM: Nonsense. The national interest is to save the City from EU bureaucrats.

Tyrie: We are united on save the financial services industry. Tell the EU that
PM: I will #safeguardthecity so trust me to regulate it

Ritchie (SLDP): #Nov30 was not a damp squib. Your pension policies are unfair
PM: Teachers on Â£32K will get a Â£20K pension! That’s fair!

Tami: Will the PM be having a Xmas party with Rebekah Brooks & Jeremy Clarkson
PM: The last sleepover was with Tony Blair. But no I won’t.

Ed M: The poorest third will lose out the most under the #AS2011
PM: Bullshit. We are punishing the richest 10% the most.

Ed M: You are making shit up. He is fucking up the budget while kicking the poor down
PM: You had 13 years to tax private jets!

Ed M: You are not listening to IFS on your own plans! You are hitting women twice as hard as men
PM: Your rhetoric is weak as piss.

Closed Question: Jeremy Corbyn couldn’t be arsed to turn up.

John Baron: Will the PM take the moment to destroy the power of bureaucrats?
PM: We are protecting micro-exploiters from the EU.

McFadden: You’ve lied to your party, do you regret chatting shit?
PM: I regret the mess that Labour left me by giving our powers to the EU.

Percy: Financial literacy is important, will you help us.
PM: Will do as you were a supply teacher or some shit like that.

Female MP: You’ve been hitting women the hardest… you bastard
PM: Hold on, we’ve helped all women by providing 15 hours of free childcare!

MP: My local council tax is increasing. What do you think about that?
PM: Back parties that will cut tax and slash services

Dobbin: The 1944 Education Act was great and defend my local faith school.
PM: I will protect faith schools

Turner: Let’s change EU employment, immigration and fishing laws
PM: Hold on, if it gets to constitutional change, I’ll do my best.

Gapes: At my local hospital, you are cutting services! You lying prat
PM: I’m increasing money for the NHS so kiss my arse.

Leadsom (Con): Strengthen families by supporting early intervention, I’ve got a business specialising in this.
PM: This is great news, I’ll support this.

Labour MP: Cut VAT on the building industry. It’ll help the economy
PM: You just want to borrow more and that sort of idea will screw up my plans.

Lewis: This political union proposed in the EU is dangerous and undemocratic.
PM: Well, we won’t join. So don’t worry you little head.

Michael (Lab): Cutting Afghanistan troops is making them miserable. Whose side are you on?
PM: We are giving troops lots of goodies and benefits now.

Lancaster (Con): My constituents are angry at their NIMBY plans got slapped down by a bureaucrat.
PM: The localism bill will give them power

Bruce (Con): Small and medium sized exploiters are the engine of the economy. Let’s scrap laws that restrict them.
PM: We are on to it.

Lab MP: Your plans are a joke, why don’t you change them?
PM: You complete cow, you want to saddle young’uns with debt! Irresponsible dicks

Tapsell: All your ideas have been ignored by ECB. A fiscal union of the EU will make the Germans more powerful
PM: Wisdom, pure wisdom.