When I met the London Met Police Commissioner 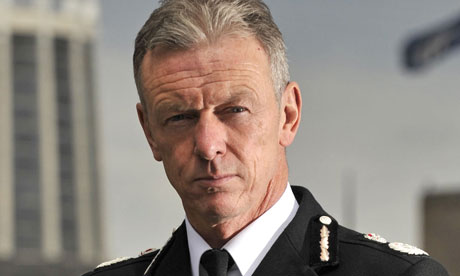 My first experience of “Total Policing” was being herded like cattle in a rolling kettle through the streets of London. When the opportunity presented itself last Wednesday toÂ ask questions to the man who brought it to London, new Metropolitan Police Commissioner Bernard Hogan-Howe, I couldn’t resist.

I never got to the bottom of any of these issues.

The meeting took place in Lewisham College. On my way in, I saw more cheery police officers willing to give directions than I recall having ever seen in my life. Beaming in their dress uniforms, they were a world apart from the scowly sorts in high-vis jackets who patrol our streets. On the stage was the Commissioner himself, flanked by the Borough Commanders for Southwark, Greenwich and Lewisham, all decked out in their finest.

Hogan-Howe opened with a short talk about crime and policing in these areas, presenting data with a jokey self-deprecating “I don’t understand graphs.” This would have been much funnier were it not for the fact that Hogan-Howe patently does not understand statistics: he wasÂ very much againstÂ the evidence-based decision to downgrade cannabis from a Class B to Class C drug. Four or five times, when technical detail would have been useful, Hogan-Howe glossed over the issue with “I won’t bore you with the details”.

In his talk, Hogan-Howe covered what he thought to be the most pertinent issues to Londoners living inÂ some of the most deprived boroughs in England. He talked about robberies and burglaries, anti-social behaviour, improving response time and the riots. He gave equal weight to uninsured drivers and police sick days, to more than a few raised eyebrows in the room. The floor was then opened for questions.

Rather unfortunately reflecting policing on the whole, the people most likely to be called on were middle-aged, middle class white men. Of the fifteen questions asked by members of the public, seven were from men from this demographic, despite the fact that the people with their hands up came from a wide range of ethnicities and equal gender representation. Overall, more than two-thirds of the people who got to ask questions were white, even though two thirds of the people in the room were from minority ethnic groups. I did not get to ask any of the burning questions I had in mind, despite spending the whole hour and a half with my hand up like the class boffin.

The first half hour of the question session was taken up by a mere three questions, filibustering from privileged people. These questions were long-winded, beginning with congratulations to Hogan-Howe which were measurable in minutes rather than substance. The Commissioner seemed happy to listen to this, and took time answering these points, then making a big show of getting the same answer from his three on-stage colleagues. This recurred throughout the evening. Hogan-Howe would give reverent, detailed answers to those who did not ask anything particularly challenging. When someone asked about bike thefts or the Olympics, Hogan-How answered a length.

On the more complicated issues, which may not have reflected so well on him, Hogan-Howe did an expert job of maneuvering around the question at full blues-and-twos. Someone asked whether Hogan-Howe was committed to a prompt and just response to deaths in police custody. Hogan-Howe challenged the figure provided, saying it was far lower than the 400 in the last ten years the person had suggested. In fact,Â it was 333 in thirteen years, a horrifyingly high number. After questioning the figure, though, Hogan-Howe did not address that this isÂ stillÂ a great travesty. Instead, he declared that the Independent Police Complaints Commission works just brilliantly, thank you very much.

A similar response was given when one person asked how the Met could perhaps inspire more trust, and whether it might be a good idea for police to fill in incident reports independently from one another following a shooting. Hogan-Howe rejected the premise that there were problems in his police force, and said he would “encourage” police to write up reports separately. Nothing mandatory, just some encouragement. “Judge us by our results”, Hogan-Howe declared.

A picture emerged of Hogan-Howe over the course of the evening, which leads me to believe the results we will be judging will be negative. The Commissioner is deeply conservative, believing that the whole system from the police to the courts works well and does not need to be changed at all. His priorities are also completely different to mine and those of many other Londoners.

When asked directly what his biggest priorities in his position as Commissioner were, Hogan-Howe replied that the Olympics, counter-terrorism, robberies and tackling gangs struck him as most important. His attitude to many of the above made me wish he would quickly shift his priorities.

Counter-terrorism does not necessarily mean countering terrorists: let us not forget that classed among terrorists are aÂ bunch of people camping outside a church. That great priority is given to attacking peaceful protest suggests that we will see far more “total policing” in public order situations, which will further quash our ability to disagree with injustices.

Likewise, the continued focus on robberies suggested that London’s Commissioner was less interested in crimes against people, and more about crimes against property. At one point, a woman asked a question about attacks on women, and what Hogan-Howe would be doing to make things safer. He focused on theft from women rather than crimes of a more personal nature. Likewise, he could talk at length about bicycle thefts and burglaries. In my opinion, people are far more important than property. This does not seem to be the view of Hogan-Howe.

Hogan-Howe’s attitude to young people is bizarre. He seems to see them as a problem to solve. Each time an issue pertaining to young people came up, he would talk about the challenge they present, even admitting he prioritised gangs because it would be “a challenge”. Do we really want someone in charge of a police force viewing a group of people who are already experiencing a royal shafting from the system as a human equivalent of the Times cryptic crossword?

My opinions differed from many of the people who attended the meeting that night, but ultimately we all had the same thing in common: we wanted to feel safer in our communities. After “meeting the commissioner”, I am not sure that Bernard Hogan-Howe is the right person to bring that about.

Zoe Stavri is a PhD student. In her spare time, she is an anti-cuts activist and blogs atÂ Another Angry Woman.


When I met the London Met Police Commissioner http://t.co/WNzq6u2p << a great post by @stavvers


When I met the London Met Police Commissioner http://t.co/WNzq6u2p << a great post by @stavvers