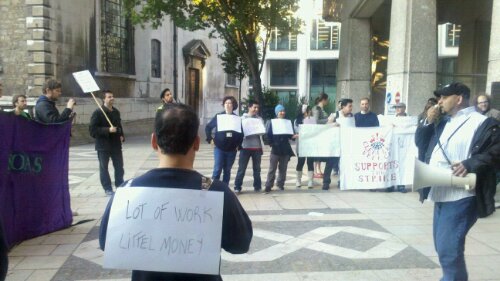 Cleaners staging sit in at Corporation of Londonâ€™s Guildhall over abuse of women!

Cleaners are staging a sit-in at the Corporation of Londonâ€™s Guildhall in protest at the inadequate response of their employer, the contractor Sodexo over the abusive treatment of women employees.

The cleaners who are organised by the independent workers union, the Industrial Workers of the World say their action comes after a growing frustration with Sodexo (and their predecessor Ocean) following
persistent complaints regarding the conduct of certain members of the management team at Guildhall.Â  Repeatedly complaints have been raised with respect to varying degrees of the mistreatment especially women, including extreme acts such as bullying, confinement of individuals, intimidation and assault.

The cleaners say the last straw was an incident involving a manager and one of the union representatives on Monday 21 November.Â  The rep Isabel Martin was followed to a room in the basement of Guildhall, where she was blocked from leaving with the door closed, then it is alleged a male supervisor subjected her to an outburst of aggression and intimidating behaviour, the terrified women felt wasÂ  under threat of real physical violence.

The IWW London Regional Secretary Chris Ford states that â€˜the union has raised concerns and complaints of the treatment of employees on enough previous occasions with the employers to warrant sufficient preventative measures to safeguard the safety employees and to ensure no further mistreatment may occur. In the summer a mass meeting of cleaners had called for the removal of those managers responsible for ill-treatment of workers.â€™Â  The last incident the IWW insists could have been avoided if the concerns of workers were respected and acted upon beforehand. One cleaner stated: â€˜These big companies need to put the safety of the workers before the reputation of the City of London
Corporationâ€™.

The union feels Sodexo have dragged their feet over this incident â€“ they raised a complaint in letters of 22/11/2011 and 29/11/2011 but it took twenty days before the women worker was formally interviewed.Â  Her complaint of such a serious matter has been treated as a mere grievance.

For the last two days a number of workers have refused to undertake their cleaning duties and are staging a sit in at the reception of the Guildhall.Â  They are demanding robust action that can protect women workers from such ill-treatment occurring again.