The first tweeted #PMQS translation of 2012

It was the first PMQs of 2012, and Ed Miliband didn’t appear to have much of a comforting break. PerceivedÂ harsh criticisms from his guru, Lord Glasman, tepid polling, shortly followed byÂ his embarrassing blackbusters’ gaffe. David Cameron meanwhile has postured on executive pay, made some potentially counterproductive interventions on the future referendum on Scottish independence. Also this week heralded the ground breaking Spartacus Report being published and released. Here is our take on what happened on that day… 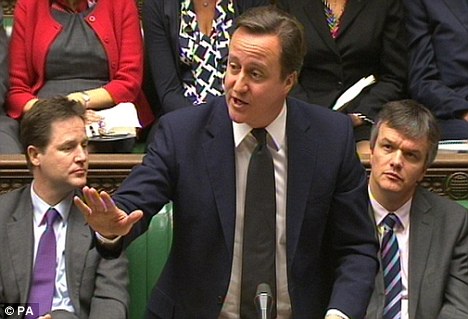 Graham Stuart (Con): Food Standards Agency is costing jobs in my patch.
PM: I’ll help your factor to get their dodgy food out to China

Ed M: Rail fares 1% above inflation, why has some increased by 11%
PM: Errr.. its Labour’s fault

Ed M: No we stopped it! Stand up to train companies!
PM: That’s crap! We want money going to fat cats to force them to improve our railways

Ed M: Rail companies were ripping off passengers. We stopped it, you reintroduced it.
PM: RPI + 1% is what we allow. Labour allowed more!

Newton: We need higher standards of nursing care, what you doing about it?
PM: Well we will replace state NHS bureaucracy with a private one

Ed M: We must be positive about why Scotland should stick it out with our disunited kingdom.
PM: I agree, let’s unite to fuck up the SNP.

Ed M: Let’s have a talking shop about the referendum. This separatist shit is serious!
PM: You are absolutely right (for once).

Grant (Lab): Tackle forced marriages!
PM: I’m looking at making it a crime. It is barbaric that immigrants have brought this shit to Britain

Greenwood: The cuts will impact my local police force
PM: Most police chiefs are able to cope with it. Your lot’s got too much office staff!

Stephenson: Look at my Bail amendment, my constituent was killed due to poor decisions.
PM: Respect for your work on this. We’ll work on it.

Moray: The SNP were elected on more legitimate than you fuckers! FACT! Stop aping Thatcher
PM: I want to negotiate a SNP balls up.

Mullholland (LD): Age Concern have asked me to talk up paying for care
PM: It’s important so I’ll put my concerned voice and face on.

Meacher: The top 10% are getting richer & you failing to tax them to cut the deficit!
PM: You talking about Tony Blair? I’ll look into it.

Coffey (Con): Our wealthy post offices are leaving rural villages behind.
PM: We’ll improve the network by including mobile ones

Simpson (DUP): Nick Clegg said that you’re signing up to the new EU treaty. Is that true?
PM: Err.. I didn’t sign the one that was discussed

Jones (Con): There are predatory capitalists ripping off pensioners!
PM: Ed Miliband’s advisor on “responsible capitalism” is a tax dodger.

Valerie Vaz: Save UKRC we need women scientists!
PM: We didn’t cut the science education budget (one of the few we left out.)

Crockart: 2012 should be the year we abolish Guantanamo bay.
PM: I’ll have an inquiry into torture at those camps

Mcclymont (Lab): Keep the 50% tax rate throughout this parliament
PM: I think Darling was right, it will be temporary.

MP: Bosses earning 35 x the pay of doctors, executive pay must come down
PM: We’ll introduce it in public sector, Labour did sweet fuck all

Boles: Forget top pay, look at benefit scroungers!
PM: True. We have too many immigrants cheating us and unlike Labour we’ll deal with it.

Cunningham: NHS Cumbria is in a real crisis. Do something.
PM: We need to nudge people into being healthy, and increase price of alcohol.

Kendall (Lab): We need more bone marrow donors. What can be done?
PM: Well done for speaking up on this issue. The big society will sort it

Ruddock: My constituent is being made homeless by the cutting of housing benefit by 50%
PM: Labour backs these cuts! Rent is coming down