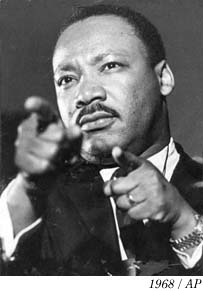 Over two hundred people gathered at the steps of St Pauls cathedral today to celebrate the birthday of Reverend Dr Martin Luther King, commemorate his lifeâ€™s work and share their views on how Dr Kingâ€™s legacy is relevant today.

The event, a collaboration of community activists, church members, trade union representatives and OccupyLSX, was co-hosted by Lee Jasper.

Selma James, founder of the International Wages for Housework Campaign and author of The Power of Women and the Subversion of the Community, met Dr King in the 1950â€™s. Her husband, the legendary marxist CLR James, had invited King to join him for lunch in London when the pair met in Ghana at the 1957 Independence celebrations. James drew a number of historical parallels between neoliberalism, riots and war in the present and what Dr King faced when he attempted to cool off the rioters in Watts, LA, 1965. King was jeered off and subsequently accepted the argument that perhaps riots were the only way black voices were going to be heard. A day later, he invited Stokely Carmichael to church and came out in opposition to the Vietnam War. James spoke of Kingâ€™s further swing to the left, for instance when he supporting striking dustmen in Birmingham.

There was a contribution from Mario Joseph, a Haitian human rights lawyer who spoke about his countryâ€™s legacy – the first independent black republic in the world in 1804. Joseph went on to speak of his countryâ€™s present struggle against cholera, and the ongoing occupation of Haiti by UN forces â€“ there to impose and maintain neoliberal policies on the island. 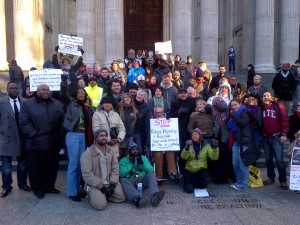 Merlin Emmanuel, who lost his uncle Smiley Culture, aka David Emmanuel, at the hands of police last year, spoke about the issue of deaths in custody, double standards of the criminal justice system and the importance of giving young people hope for their futures. On the Lawrence verdict, he said:

â€œAlthough I was happy with the Stephen Lawrence verdict, I maintain that the full measure of justice is yet to be served. There will be some closure for his family of course, but the conviction of two murderers when there were at least five involved shows that justice still has to be procured. Further to that, the individuals involved were expendable in my opinion, a gang of rogue racist thugs that the system decided to sacrifice to give the false impression that everything is ok and well here in Britain.â€

The Rigg family is still waiting for a proper enquiry and crucial evidence from the IPCC. The Â United Families and Friends Campaign (UFFC) will be launching an e-petition on the 20th of January to demand a public enquiry into deaths in custody. Please sign!

Despite a relatively low turn-out, the atmosphere at todayâ€™s event was great and it was clear from the variety of voices and the sense of unity at the event that increasingly, different groups and campaigns are talking to each other. Whilst prominent trade union campaigners like Zita Holbourne and Lee Jasper were present, the language used was very much that of the Occupy movement. Martin Luther Kingâ€™s birthday thus provided the opportunity for a variety of campaigns to join forces, commemorate Dr Kingâ€™s legacy and celebrate its continued relevance.

The presence of the OccupyLSX camp continues to provide the movement with a site of resistance in the heart of London. A large number of tourists stopped by to listen to todayâ€™s speeches.

Occupy London will be in the High Court at 2pm on Monday 16 January to hear judgement regarding the injunction requested by the London Stock Exchange. Eviction is expected within days of the court judgement if the injunction is served.

No Justice, No Peace.