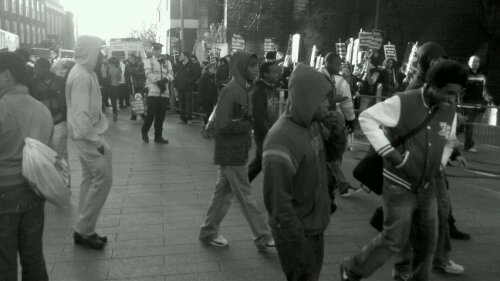 The callout came late on Thursday night, I received a text message forwarded from a friend stating Steve Hedley from the RMT has called for a counter-demo to oppose the English Defence League in Barking.

UAF made a similar callout on Friday, I was surprised that staunch anti-fascists were apparently either caught unaware until short notice or decided only belatedly to hold a counter-demo. I suspect the reason was the latter. Barking & Dagenham Council, formerly the electoral stronghold of the British National Party had allowed the English Defence League to march through the Town Centre, assemble in front of the Town Hall and loudly play music in a residential area.

The anti-fascist mobilisation led by Unite Against Fascism on the day was small but significant, around 60-70 people, surrounded and matched in number by the police. We gathered at the front of the market, distributing leaflets and catching up with old comrades. While I bought a pasty, a shop worker asked me what was happening. I explained that the EDL were marching and I was part of the group to oppose them. She replied:

“Good, I’m glad someone is standing up to them. They are not welcome here.”

While we waited in the cold for the EDL to march, the racists were drinking in the Wetherspoons whilst equally surrounded by the police. At around 1:30, English flags with the EDL logo emblazoned in the centre were hoisted into the air and we started chanting and singing as the racists came down the hill.

“Unemployment and inflation
Are not caused by immigration
Its bullshit, come off it
The enemy is profit!”

The EDL were mostly composed of white, ageing skin-heads, however their stewards were mostly middle aged smiling women from (according to their fluorescent bibs) Berkshire. In total there were around double our number, as we taunted them, you could see quite a few welcomed it, though a number were angered at the suggestion that they were being called racist while marching with clear British National Party organisers.

As they walked past, we then moved to the town centre, where Weyman Bennett led us into a nice cage that had been arranged for us by the police. The EDL were about 50 metres away and we were both outnumbered by the police who filled the chasm between us. Locals watched bemused by two chanting groups cordoned off from each other. I left our cordon to talk to some of the youth and they joined our section to swear and shout at the EDL and have a laugh while doing it. Our contingent though small seemed to have a diverse array of Britain was made of Asian local councillors, young African, African-Caribbean and Asian teenagers, female trade unionists of varied backgrounds,Â  white and Sikh students and the odd anti-racist skinhead.

After 15 minutes, Weyman suggested that we join a Stephen Lawrence vigil that was away from the demonstration. Others expressed their desire to stay until the EDL had left the Town Centre. This caused a split and reduced our small number into half, to the cheer of the EDL. I guessed this was the local Labour Party’s attempt to draw attention away from the EDL and reduce the likelihood of confrontation, though with our small number I believed it would appear like we were running away and conceding defeat. So our resident skinhead started another song:

Their only audible chant was “E-E-E-D-L”, in the usual football hooligan-cum-man-ape manner and with not much humour. The anti-fascist contingent that stayed and sang “Cheerio” to the racists as the English Defence League were escorted back to the rail station by the police. Weyman shortly after reappeared to inform us that we were to stay behind in the town centre, until it was considered “safe”.

As we waited, around 5-6 police officers, one of whom was of African origin decided, in a somewhat provocative manner, to stop and search two black teenagers, plus “stop and account for” two other non-white teenagers who joined us from the street. Some of us started shouting “SHAME! SHAME!” to officers as we witnessed one teenager being thoroughly padded down for weapons. As tensions we’re clearly rising we were then asked to stop chanting by a local councillor.

I obliged and went around to see the police officers faces and asked if this was happening under Section 60, one officer looks at me and shook his head. The Met are currently reviewing its use of that power and so are probably under orders to use it sparingly. This meant that they were likely being searched by section 1 of the Police and Criminal Evidence Act 1984.

At this point the approximately 10 police officers were surrounded by activists and locals who were predominately women of African and African-Caribbean origin, watching with disgust and outrage.

I asked the officers what crime were these young people suspected of, one officer calmly replied that his superior heard one of these youths “talking about finding articles to throw as missiles at the other demonstration”, so where being searched for having offensive weapons on suspicion of causing an affray.

“So you think its plausible that these young people have the Herculean strength to throw a missile from the back of our demonstration over our heads, across 50 metres and into the EDL demonstration? Ridiculous.”

Whilst seething with anger, we watched the search take place. As I looked at the young men, only the non-African kid, who may have been of Central Asian/Eastern European heritage appeared the most upset by it. The others were anything but angry or annoyed. Indifferent, numb and even possibly bored are more accurate descriptions ofÂ  the procedure which they may have had some familiarity with.

Later that day I went on to Whitechapel for a meeting and coincidentally this happened. A bunch of anti-fascists were on hand to intervene but it appeared that the locals dealt with what was suspected to be a dozen or so white teenagers eager for a fight.


mT @justinthelibsoc: In case you missed it: The curious story of when the #edl came to #Barking http://t.co/sa2BlRsg #stopandsearch #UAF


RT @policemonitor The curious story of when the EDL came to Barking http://t.co/nZ6bfn6w via @justinthelibsoc