From Wandsworth Against Cuts 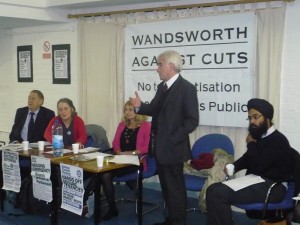 Campaign group Wandsworth Against Cuts welcomes the decision of Wandsworth Council to stop the eviction process they started after last summer’s riot at Clapham Junction. Maite de la Calva and her lawyer, Emma Norton from Liberty, met Wandsworth Council on Thursday 19 January, and were told that the Council are not going to proceed. This is now a precedent for other Councils nationally who want to punish innocent council tenants. Southwark Council appear to be trying to evict two households in a similar position.

Maite and her eight year old daughter were to be evicted because of her son’s limited involvement in the Clapham Junction events last August. They were immediately issued with a Notice Seeking Possession without even the normal prior tenant interview. David Cameronâ€™s flagship Council was prepared to impose collective punishment on an innocent mother and her young daughter. But their desire to gain political popularity by being tough on rioters does not justify unacceptable political punishment of relatives, and is against any sense of justice.

Maite’s victory is a credit to her own courage and honesty, faced with a highly vindictive attack. Victory was helped by her many supporters on her Doddington estate in Battersea, by MPs and campaigners from Wandsworth Against Cuts, by Defend Council Housing and by Liberty, as well as the support of Battersea & Wandsworth TUC.

Wandsworth Council, which has Â£105 million in reserves, and which has been so keen to evict tenants has also threatened to close adventure playgrounds, childrenâ€™s breakfast clubs, local libraries and the Doddington Childrenâ€™s Activity Centre. They are now cutting 16 youth worker posts, plus seven more in 2013.

The threats continue. Hence the fight against Wandsworth Council cuts goes on.