This week’s #PMQs in tweets – Ed Miliband finally wins one

Wednesday 25th January 2012 was a momentous day; the first year anniversary of the Egyptian Revolution celebrated with protests and demonstrations, Peter Tatchell turned 60, Bob Crow finally got to complain about the press and Ed Miliband appeared to have a good Prime Minister’s Questions. 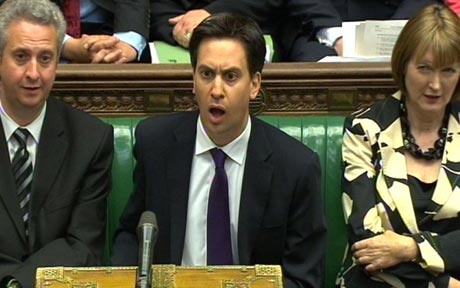 Labour MP: You love youth unemployment admit it
PM: Poppycock. I’m going to starting my youth employment programme in the future… one day

Ed M: Fuck off! Eurozone got nothing to do with it
PM: Not just Eurozone, it is poor people’s fault too. I’m cutting tax for corporations

Ed M: You smug fuckers, you are borrowing more. You are a miserable failure
PM: Britain did alright last year. IMF backs our plan.

Ruffley: Fred the Shred shouldn’t have a knighthood.
PM: There will be an announcement on that shortly.

Macneil: Scotland’s people are sovereign, keep your English toff noses out of it.
PM: I agree, the people won’t have a say but their MPs will.

Tapsell: You are funnelling money to the Gerrys via the IMF.
PM: I’m very clear, we won’t give more money until Eurozone bails themselves out.

Ed M: How is support for the health bill amongst NHS staff going?
PM: Erm… I’ve got one GP from your town who likes it.

Ed M: 98% of GPs hate it, Nurses want to #dropthebill. Listen to them
PM: Well one GP in your patch likes it so there *blows raspberry*

Smith (LD): After 167 workers died, we have best health & safety regulation. Stop the EU watering it down.
PM: We will try.

MP (con): The Oil refinery has gone bust in my patch! Help us!
PM: We are always here to bail out failed businesses.

MacFadden (Lab): You’ve given terrorists the freedom to bomb the Olympics.
PM: Come off it, you know the Control orders were shit.

Adams (Con): Support biofuels which will help landowners not windfarms which I hate.
PM: We will look into it.

Ellman (Lab): Friday is holocaust day, let’s remind everyone of Nazi evils.
PM: Yes these stories must be told but not others.

Ollerenshaw: My constituents want benefit scroungers to get a good kicking.
PM: Labour are hypocritical in their support

Nandy: Lobbyists are all over your government.
PM: At least you know about it under my reforms!

Maynard: You are right to be against mothers in poverty
PM: We will give them time to adjust to further misery

Roy: Small exploiters haven’t got more cash from banks. You’ve failed
PM: I’ve got a bit of paper saying they will do better.

Stewart: Pensioners are pissed off that they are not getting child benefit
PM: Yes it is shameful. We’ll increase their pension by a modicum

Ruane (Lab): You’ve exaggerated the Work Programme. It doesn’t work.
PM: We are making sure the exploiters are getting value for money.

Kelly (Con): My local peeps think housing benefit is too high! Why does Labour fight it?
PM: Cos Miliband is a weak incompetent shit.

Bruce (LD): BA is taking over BMI. Is this good for Aberdeen?
PM: Will get into it

Patel (Con): My consitutent was killed in Germany. Bail out the mother please.
PM: Marie heath family is going through a lot. We’ll help.

Stringer: We need a clinical director to manage costs in the NHS
PM: You don’t understand what privatisation does. It helps everyone

MP: It is a disgrace that the Labour Party wants to help poor children!
PM: Absolutely right, they better vote for the benefits cap!

PMQs Minus The Bullshit – Forget Marx, Ed Miliband is loving Engels instead
November 27, 2013

PMQS Minus The Bullshit: Is Michael Meacher on Crack?
November 20, 2013


Thanks very funny better analysis that many. Do you do one every week


Almost every week, I didn’t publish last week’s because it wasn’t funny enough. Anyways you can look at the previous ones here: PMQS Tweeted