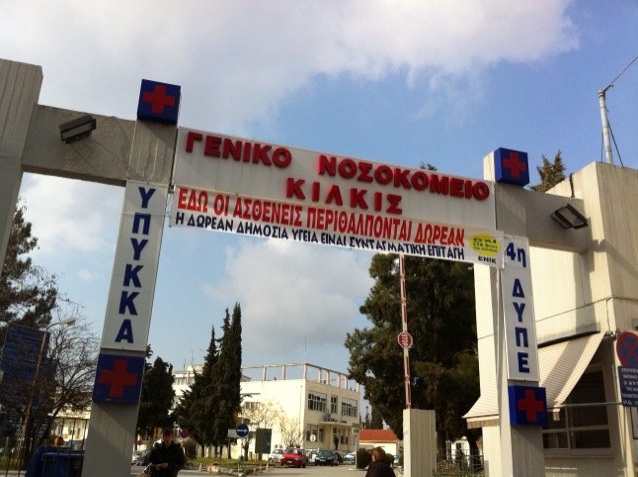 Health workers in Kilkis, Greece, have occupied their local hospital and have issued a statement saying it is now fully under workers control.

TheÂ general hospitalÂ of Kilkis in Greece is nowÂ under workers control. The workers at the hospital have declared that the long-lasting problems of the National Health System (ESY) cannot be resolved.

The workers have responded to the regimeâ€™s acceleration of fascism by occupying the hospital and outing it under direct and complete control by the workers. All decisions will be made by a â€˜workers general assemblyâ€™.

The hospital has stated that. â€œThe government is not acquitted of its financial responsibilities, and if their demands are not met, they will turn to the local and wider community for support in every possible way to save the hospital defend free public healthcare, to overthrow the government and every neo-liberal policy.â€

From the 6th February, hospital workers will only deal with emergencies until their wages, and monies owed have been paid. They are also demanding a return to wage levels prior to the implementation of austerity measures.

The next general assembly will take place on the 13th, and a related press conference will be given on the 15th.

The following statement has been issued by the workers:

1. We recognize that the current and enduring problems of Î•.Î£.Î¥ (the national health system) and related organizations cannot be solved with specific and isolated demands or demands serving our special interests, since these problems are a product of a more general anti-popular governmental policy and of the bold global neoliberalism.

2. We recognize, as well, that by insisting in the promotion of that kind of demands we essentially participate in the game of the ruthless authority. That authority which, in order to face its enemy – i.e. the people- weakened and fragmented, wishes to prevent the creation of a universal labour and popular front on a national and global level with common interests and demands against the social impoverishment that the authority’s policies bring.

3. For this reason, we place our special interests inside a general framework of political and economic demands that are posed by a huge portion of the Greek people that today is under the most brutal capitalist attack; demands that in order to be fruitful must be promoted until the end in cooperation with the middle and lower classes of our society.

4. The only way to achieve this is to question, in action, not only its political legitimacy, but also the legality of the arbitrary authoritarian and anti-popular power and hierarchy which is moving towards totalitarianism with accelerating pace.

5. The workers at the General Hospital of Kilkis answer to this totalitarianism with democracy. We occupy the public hospital and put it under our direct and absolute control. The Î“.N. of Kilkis will henceforth be self-governed and the only legitimate means of administrative decision making will be the General Assembly of its workers.

6. The government is not released of its economic obligations of staffing and supplying the hospital, but if they continue to ignore these obligations, we will be forced to inform the public of this and ask the local government but most importantly the society to support us in any way possible for:

(a) the survival of our hospital

(c) the overthrow, through a common popular struggle, of the current government and any other neoliberal policy, no matter where it comes from

(d) a deep and substantial democratization, that is, one that will have society, rather than a third party, responsible for making decisions for its own future.

7. The labour union of the Î“.N. of Kilkis will begin, from 6 February, the retention of work, serving only emergency incidents in our hospital until the complete payment for the hours worked, and the rise of our income to the levels it was before the arrival of the troika (EU-ECB-IMF). Meanwhile, knowing fully well what our social mission and moral obligations are, we will protect the health of the citizens that come to the hospital by providing free healthcare to those in need, accommodating and calling the government to finally accept its responsibilities, overcoming even in the last minute its immoderate social ruthlessness.

8. We decide that a new general assembly will take place, on Monday 13 February in the assembly hall of the new building of the hospital at 11 am, in order to decide the procedures that are needed to efficiently implement the occupation of the administrative services and to successfully realise the self-governance of the hospital, which will start from that day. The general assemblies will take place daily and will be the paramount instrument for decision making regarding the employees and the operation of the hospital.

We ask for the solidarity of the people and workers from all fields, the collaboration of all workers’ unions and progressive organizations, as well as the support from any media organization that chooses to tell the truth. We are determined to continue until the traitors that sell out our country and our people leave. It’s either them or us!
The above decisions will be made public through a news conference to which all the Mass Media (local and national) will be invited on Wednesday 15/2/2012 at 12.30. Our daily assemblies begin on 13 February. We will inform the citizens about every important event taking place in our hospital by means of news releases and conferences. Furthermore, we will use any means available to publicise these events in order to make this mobilization successful.

a) Our fellow citizens to show solidarity to our effort,
b) Every unfairly treated citizen of our country in contestation and opposition, with actions, against his’/her’s oppressors,
c) Our fellow workers from other hospitals to make similar decisions,
d) the employees in other fields of the public and private sector and the participants in labour and progressive organizations to act likewise, in order to help our mobilization take the form of a universal labour and popular resistance and uprising, until our final victory against the economic and political elite that today oppresses our country and the whole world.

VIDEO: Into the Fire – A Documentary Film about Refugees and Migrants in Greece
April 21, 2013

From Red Gold to Blood Strawberries: A Story of Immigrants in Europe
April 19, 2013