Another week, another Prime Ministers’ Questions, though David Cameron this time really seemed to be upset Â This is what we heard and tweeted in the week when demonstrations were happening in Belgravia for Occupy Oil, and the Queen commemorated the 60th anniversary of her father’s popping his clogs. 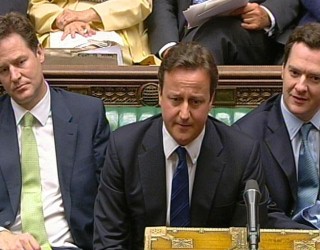 PM: I pay my tribute to the Queen for humbly receiving state benefits for the last 60 years. An inspiration to us all.

MP: LOVE Queenie. You have cut police officers on the street. FACT
PM: What? Boris Johnson has done a great job, lots of coppers now

Amis: A coup in Maldives? Shouldn’t we invade?
PM: President resigned. As long as they leave our tourists alone. We’ll leave them.

Ed M: Queenie is the best person ever. How did that pause work out?
PM: 95% of doctors are doing the reforms we’re forcing on them.

Ed M: Lansley turned for once. His reforms are still shit aren’t they?
PM: Opportunist! I love the NHS, even let my kid go there once.

Ed M: Even the Tories don’t trust you on the NHS! Its stupid & dangerous.
PM: Hang on, the NHS is doing better… *channels Tony Blair*

Ed M: You arrogant fuck, lying about reforms… no-one trusts you.
PM: We are cutting the NHS to save it! Your record was crap.

Ed M: Our record is best ever. Stop this useless bill.
PM: Yeah well you got chucked out and I’m Prime Minister. So fuck off.

Ed M: We all know this bill is shit and toxic. Drop the bill.

Birtwhistle: My patch is doing well on new jobs by making them slaves first.
PM: Well done. This is the Britain I want #workfare

Hendricks: Why haven’t workers in my patch got jobs from Indian aid payments?
PM: Let’s all back the arms trade for Britain!

Mordaunt: When will GPs be able to decide cancer treatments?
PM: Our shining great Millenium Dome of NHS reform will sort it.

Davies: Abu Qatada will bomb the Olympics with his internet connection! Disgusting
PM: We are trying to deport him to Jordanian torturers.

MP: Check the ward closures in my patch are reliable
PM: I’ll look into it.

Miller: Public procurement is a mess. We need leadership
PM: The public aren’t interested in these matters so shut up.

MP: Potential disaster evacuations should be organised by government not Thomas Cook.
PM: Yes the MOD will be organising this from now on.

llwyd: We need a stalking law.
PM: Yes I agree, let’s meet up about this.

Rutley: Apprenticeships are going up, thanks for the cash.
PM: These payoffs should turn into votes. We’re helping small businesses exploit young people.

McKay: Qatarda is free to fuck up Britain. What are you on?
PM: I’m trying to get rid of him!

Labour MP: How many calls have you had with the India PM to force him to give us jobs?
PM: YOU FUCKER! I’M DOING ALL I CAN TO SELL ARMS TO THE WORLD!

Con MP: We need more deregulation… I mean local commissioning in the NHS.
PM: Absolutely right, that’s what its all about.

Keeley: PIP implants is the future of the privatied NHS. Just drop the bill.
PM: On PIP, it is up to locals to sort it out.

Dineage: My patch could lose jobs, help us.
PM: I strongly back the war industry. So will look into it.

Glindon: North Sea jobs are important, give tax breaks for oil companies.
PM: We increased tax on fuel to as an election bribe.

Bone (Con): You got a government minister arguing against the government!
PM: I don’t believe Lib Dems are two faced!

MP: Russia backs Syria, are they working for peace?
PM: No. They should back our invasion plans for peace.

Michael (Lab): The NHS is beacon for the world. Drop the bill
PM: You are cutting the NHS in Wales, so bugger off.

Vickers: Workers in my patch are joining the Big society. Give them a bung.
PM: We’ll create an exploiter zone in your patch.

“Ed M: We all know this bill is shit and toxic. Drop the bill.”