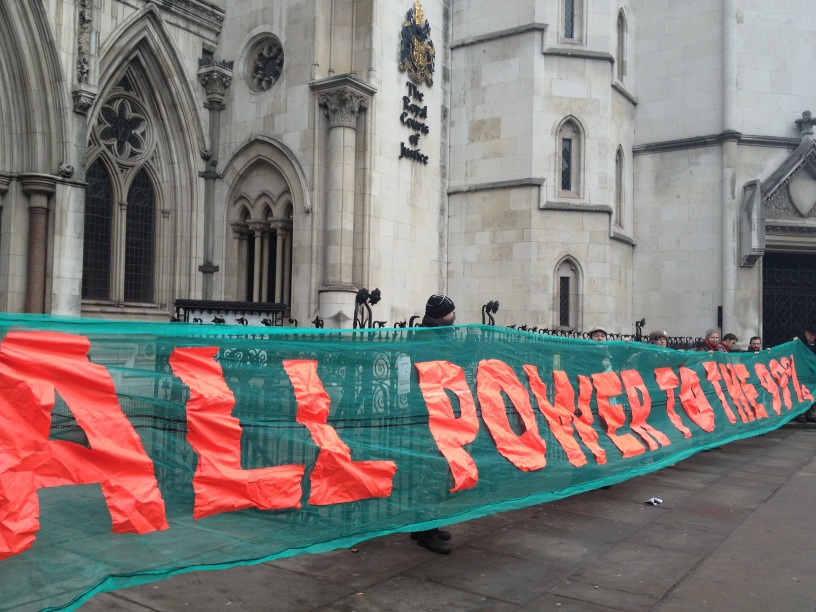 While Occupy London mired in legal arguments, failed occupations but managing to successfully carry out an education project, hope springs beyond the School of Ideas. Carriers of the flame have emerged in Lewisham, South London and Hinkley, Somerset.

The spirit of direct action in Lewisham is going from strength to strength, last month as part of the Winter Warm-up they occupied Lewisham Town Hall, now Lewisham People Before Profit have occupied empty homes in defence of Council Housing and for collective ownership to protect the homeless.

Meanwhile in Somerset, protestors have occupied a site at Hinkley Point Nuclear Power Station, this is to stop EDF Energy in the words of one occupier:

“Not even EDF are willing to guarantee that a new nuclear power station will be economically viable, and I for one do not want to see this beautiful land turned into a Toxic Waste dump.â€

What is important about the spirit of the protestor is not their ability to complain about an authority. Though we live in an anodyne culture of consumption and compliance which shrinks collective autonomy and individual self-determination alike, it is remarkable that significant numbers of people decide not only to complain but to collectively act. This is what separates the Occupy movements from what went before, the popularisation of mass direct action. This wasn’t just non-compliance with the powerful, like in Tunisia and the African Awakenings, it was actively pursuing those who held power in order to abolish their position if not their structures.

Notable elements within Occupy the London Stock Exchange seem to have forgotten this, the show trial farce that was #OccupyJustice achieved nothing and reduce the potentially powerful concept to an X Factor style text vote. The reason that many people cheered on the attempted take of Paternoster Square was that authority and the status quo it relied on was being challenged. A different world was not only possible but appeared to be going through its birth pangs in the Occupy movements.

However many are now wondering if those birth-pains are leading to a still-birth of movement for radical change. Maintaining the presence at St Paul’s was a powerful symbol but the movement does not live on symbols alone. Occupy London has been faced with many challenges and has surpassed many expectations including mine. Now however if it is to survive the year, its central theme and currency must be the challenging of power and building solidarity amongst the 99%.

Building solidarity is key, everything else is PR. While PR is useful only solidarity will change the world. Those who still find the label “Occupy London” useful should look at making practical economic gains and offering assistance to those who are at the sharp end of the policies Â of the 1%. This means more Lewisham-style occupations, having positive suggestions for radical change.