In Defence of Abu Qatada’s Freedom 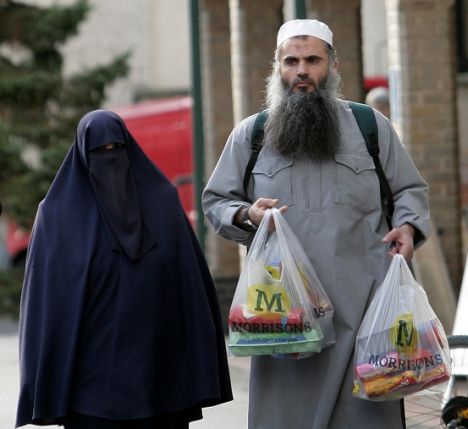 The man most feared by Britain's government. Credit: Rosie Hallam

Over the last few days there has been outrage amongst the British public whipped up by the Tabloid Press, both Labour and Conservative MPs alike that Abu Qatada, often described as “Bin Laden’s right hand man in Europe” has been freed by British courts and our immigration system refuses to deport him to a country which has tortured him and has associates.

We have the farce in which the Coalition government, while supposedly championing human rights in Europe, clamours eagerly with a backward monarchy to promise on paper at least that they won’t torture Britain’s most dangerous resident, though with no qualms that the regime will continue to torture other citizens.

When pressed for justifications he reveals essentially when a foreign person is considered a threat to society, it is right to intern them. The rationale is this: if we give up some civil liberties, we protect our most important rights to life. So in order to ensure that we do not get blown up, we must give the state more power to infringe on the rights of the “bad people”, if you are innocent, you have nothing to fear from the state.

That argument isn’t just illiberal, it is dictatorial, it contravenes the basic human rights that former Soviet countries like Albania, Poland and Latvia recognises but successive British governments have struggle to. During the Blair years and now continued today by Blairites, we are told that there needs to be a balance struck between liberty and security. At first glance, it appears quite sensible to imagine a spectrum with total liberty at one end and total security at the other. Though it is a seductive argument, it is also a fallacious one, the values of liberty and security are not essentially aligned in this way. It is perfectly possible that internment and other suspensions of freedom and justice, both reduces our liberty and our security. We flee from one perceived threat, that of terrorists, only to run into the embrace of another, that of authoritarian state which seeks to control us in a way more pernicious than the former.

It is not only possible but desirable that by upholding democratic principles such as right of assembly and  innocent until proven guilty, can increase both our liberty and security. The idea that you must choose one or the other is the argument of the authoritarian, and it is the authoritarian, we should fear more than irrational preachers of hate. Both autocrats and terrorists use fear to try to control the population, the principle of human rights is to protect us from both coercive forces.

Qatada is the best candidate in which to test Britain’s commitment to democracy, it is precisely these situations which separate liberal democracies from authoritarian forms of government. Democracies do not arbitrarily lock up people for being a perceived threat, but dictators happily do. The attempts to deport him prior to any trial are a despicable attempt to circumvent justice. It is right for Qatada to be free as he has not been convicted of any crime. The question for democrats as asked in the Guardian yesterday is: why not? There are plenty of laws both archaic and Blairite in which there is readily available evidence from speeches that exist in the public domain. It appears that the state fears what Qatada may have to say about our security services in an open court.

Abu Qatada should be free until he is put before a court and convicted of a crime. Internment or 28 days of detention and control orders are stains on the concept of democracy. The Blairites and Conservatives who wish to reinstate them must be resisted. We will not save our democracy by slowly destroying it.


In case you missed it first time round: In Defence of Abu Qatada's Freedom http://t.co/PaSEEYBG @Ellwynnnnn