Unlike many other European countries, and indeed England at points in its history, Scotland has no significant history of fascist organisation. In the 20s and 30s, while it was in the ascendancy across Europe and a fascist presence was starting to be established in England under Mosley’s British Union of Fascists, Scotland proved relatively barren ground. Â Although sectarian organisations did flourish, any attempt to organise by anyone identifying themselves as fascist met with substantial and sustained resistance. Â Again in the 70s, while the National Front gained a level of prominence south of the border, again Scotland proved meagre pickings for the fash.

Fascism however is back – softer, less skinheads, but just as ugly. The success of the BNP in the last decade was superceded by the rise of the EDL. Â Watching from Scotland, which has so far not faced the same challenges, this is a worrying development. A rhetoric based around Islamophobia, proved to be a dog whistle to young English men. The decline of manufacturing industry and de-industrialisation of the 80s Â found a subsection of youth struggling to find their place in the world and a gulf emerging from those whoÂ had benefitted from the expansion of higher education. Â This tapped into the fear being drummed up by mainstream politicians and the tabloid press of terrorists and their muslamic ray guns taking over a world which had been already destroyed by the power of capital.

Talking to some Black activists about the propensity for the imposition of austerity to drive political discourse, they have expressed fear that while that is true for many Black communities that austerity leads to a radical analysis, within the white community, it can lead to scapegoating and a desire to make sure that “the others” are targeted first, leading them into the hands of the far right. Â This is a significant worry. Â In Scotland there is a protective factor in that most of the fascists identify as British, while young white Scots in increasing numbers are seeing through the British state and seeking to establish their own national identity. Â National liberation and nationalism can very easily be conflated, as has happened with the quasi-fascist Settler Watch, and it is indeed something of which we must remainÂ vigilant, yet at present the danger presented has been from the SDL, the inbred Scottish cousin of the EDL. 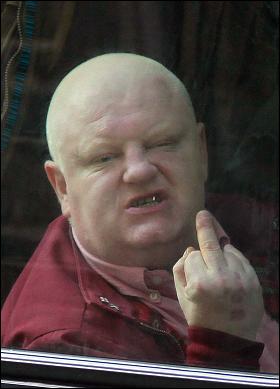 While Scotland has not seem developments of the same order, there is no question that there are worrying developments. Â In November 2009, a strong Â turnout from local anti-fascists, saw the SDL trapped in a pub, and having to be escorted out by police. Â Then in Feb 2010, they tried to turn up in Edinburgh, despite considerable dithering at the start, they were eventually run out of town.

In later that year, they assembled in Kilmarnock, where they were facilitated by police who kettled anti-fascists allowing them to march through the town, and managed to demonstrate in Stirling, again with anti-fascists kettled by police while a dozen fascists were allowed free reign in one of our towns. September last year saw one of the largest attempts at mobilisation, both from the fash, from anti-fascists, but above all from the police. Â Edinburgh city centre came to a standstill while around 100 (half of them bussed up from Northern England) gathered in a pen, shouting racist slogans, while the hundreds of police all collectively managed not to hear any incitements to racial hatred, concentrating on keeping the thousand or so assembled anti-fascists from giving them the welcome they deserved.

There have been a lot of discussions over tactics in the past few year. While I agree that it is important that multicultural rallies are held to allow people who are not able to actively confront the Fash to demonstrate their opposition, we must be clear that racists and fascists are not welcome anywhere in Scotland and if they attempt to show their ugly mugs, they will be actively confronted and run out of town. While the mobilisations in Glasgow and Edinburgh have been effective in isolating the fascists despite police protection, on each occasion there have been calls to boost the numbers at multicultural rallies or parts of the leadership which seem unaware that they are leading people into kettles. Effective militant confrontation requires a level of mobility which is impossible to achieve in a mass, and while affinity based groupings can ensure safety, large gatherings are easily contained by the state, limiting their effectiveness.

A recent worrying development has been the appearance of violent fascist thugs on the streets of Glasgow. In November last year aÂ Palestine Human Rights campaign stall was attackedÂ by 20-30 fascist thugs. Although no-one was seriously injured, violent attacks on Human Rights campaigners is a massive escalation. Â In January, the Communist Party stall in Buchanan Street was surrounded by eight men, clearly identifying themselves as Nazis, complete with white power badges and Nazi salutes, threatening and intimidating the CP members. Â This month has seen a robust turnout from the left, as a raised level of vigilance and a regular presence of supporters in the vicinity to protect political expression.

The SDL have called a demo on 25th Feb in Glasgow city centre. We will be there. Moreover theÂ National Front have applied for a march in Aberdeen City Centre on 20th April (coincidentally, Hitler’s birthday). Â Somehow I don’t think this will happen.