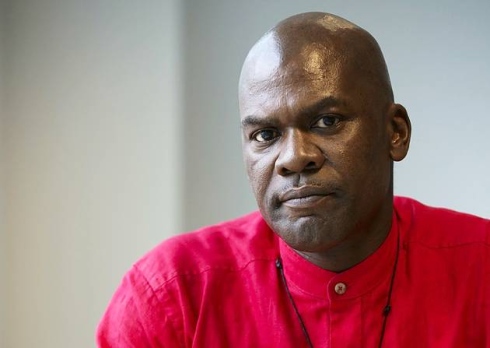 Mike Franklin of the IPCC

At Kilmorie Primary School, around 200 local residents attended a Lewisham Police co-ordinated meeting about the shooting of British Ghanaian man by the police. I attended the meeting only in the last 40 minutes but I was told by another attendee that: the police could answer no questions on the specific circumstances as the IPCC were investigating. Lewisham Borough CommanderÂ Jeremy Burton was present, along with, Mike Franklin of the IPCC and other representatives from the Metropolitan Police and IPCC.

So as an investigation was underway, the representatives could not explain why the man in question was shot at 5 times, how many officers were involved (though they did let slip it was more than one), what they suspected him of doing or why they needed to shoot after already using tasers. What the police spokesman could tell us that the experience must have been “very traumatic for the officers involved and we are doing all we can to support them and provide counselling”, also that they intended to arrest the shot man as soon as he was legally healthy enough to be arrested.

One questioner, who I later found out was one of the lawyers representing the Ghanaian man who was shot, asked why are the officers already attempting to question the man in his hospital bed under criminal caution and yet no suspicion of wrongdoing surrounds the officers?

An investigator from the IPCC said that they had received statements from the officers but were yet to decide if and when they would interview them under criminal caution.

The Lewisham police spokesman explained that these officers were able to corroborate the facts of the issue but not their reasoning or motivations. How this would be enforced and ensured remained unclear.

A member of the InPDUM asked about why the man was taken to King’s College Hospital rather than Lewisham, the police explained that KCH was chosen as it was a specialist firearm trauma hospital.

One man asked repeatedly if this was a rare event. The Police representative explained that the Police did not have firearms as routine, and this event was incredibly rare. This was met by exclamations from a member of the man’s family.

“Have the officers been suspended?”

The officers were not, nor are they ever normally suspended, they are removed from firearm duties but they are still at work as police officers.

I asked about the IPCC’s competence as the BBC File on 4 programme about police restraint-related deaths discovered that the IPCC doesn’t keep accurate figures of deaths in custody, it persistently misses out incidents that they investigated and can be identified by media reports. Also the IPCC had let down, Mark Duggan’s family, Ian Tomlinson’s family and Smiley Culture’s family. I asked how can the IPCC be trusted and what transparent process will they use to show that the investigation is happening in a timely and efficient manner?

Mike Franklin from the IPCC stated that he was on the programme and said that the IPCC were undergoing a review of their data collection procedures but until that had been finished, he would stand by the statistics they produced.

My question to the police was when generally, were firearms brought into use by the Police and does he agree with The Met Commissoner, Bernard Hogan-Howe that tasers should be deployed in every police car. The police spokesman read out the police guidelines which stated:

“in order to protect themselves or others from a person who is in possesion of, or has immediate access to a firearm or other potentially lethal weapon or is otherwise so dangerous that the deployed armed officers is considered it appropriate.”

There are also more caveats which depends on the type of knife and the demeanour of the individual.

On tasers, he clarified that it was area operational cars that Hogan-Howe wanted to be in possession of tasers not every car and that was under consideration. He added that the police deal with elements of society that the general public didn’t want to deal with. The South London Press shows that firearms are regularly used by criminals so the police need to use them despite the spokesman’s pride in that British police officers do not carry firearms as standard. He claimed we’re the only country in the world that does this (I think New Zealand doesn’t either).

The councillor with the responsibility of Community Safety got up to share that she too had concerns but also to urge everyone not to jump to conclusions and wait for the IPCC investigation.

The most telling question came from a woman of African-Caribbean descent towards the end which basically asked how many police officers have the IPCC successfully referred to the CPS?

Mike Franklin of the IPCC stated that “I don’t have the statistics to hand but we will do a thorough investigation.”

The statistics which were eluding Mike Franklin show that the answer is zero. The IPCC has never presented information that has led to the successful prosecution of a police officer. In fact no police officer in England and Wales has ever been convicted of a death in police custody. Even in the case of the death of Ian Tomlinson, that was brought about by the evidence uncovered at the inquest of his death NOT as a result of the IPCC’s investigation.

The one time I can identify when the IPCC did refer a police officer to the CPS, the charge could not be made because it was later than the 6 month time limit on common assault, that case regarded Jody McIntyre.

After a few final comments the meeting had ended, I spoke with members of the family who were amazed that the IPCC have never successfully brought any police officers to account. I asked Mike Franklin afterwards how would he satisfy my question regarding a timely and efficient investigation, he said that he would make monthly reports, if there was anything to report but the investigation could take between 6 to 8 months.

You can watch the entire meeting recorded by LCPTV here: