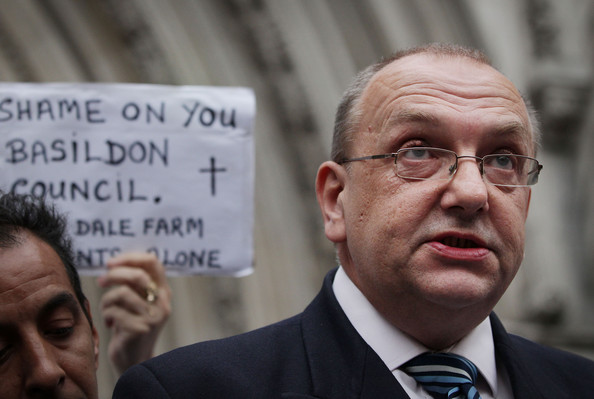 Tony Ball, leader of Basildon Council and architect of the Dale Farm eviction, was forced to flee an awards ceremony by angry protesters in central London last night.

Nominated for the award of â€˜Council Leader of the Yearâ€™ by the Local Government Information Unit, Tony Ball was confronted by 50 vocal Dale Farm supporters when he attempted to leave the Westminster City Hall. He was hounded back into the building by the protesters, who invaded the lobby shouting â€˜scumâ€™ and â€™83 families homelessâ€™, and was ultimately forced to leave under police guard via a back exit.

Robert McCready, a supporter of the Dale Farm community, said,

â€œIt is genuinely shocking that any self-respecting body could choose to nominate a man who spent Â£7 million of public money on making 83 Dale Farm families homeless in a brutal manner. The LGIU tonight attempted the whitewash the horrors of the Dale Farm eviction and we didnâ€™t let them. Tony Ball was shame-faced as he fled.â€

â€œHow anyone can think a man like that deserves to be rewarded, I just donâ€™t know. He wrecked our community and our lives and thinks he can get away with it. He is a disgrace and what he, his council and the Government did will never be forgotten.â€

I am deeply honored to be given this award. It has taken a long time and cost millions of pounds of other peopleâ€™s money to achieve this. It has been a long journey and it was a true team effort with total commitment that we have achieved what we have set out to do.

I would like to take this opportunity to thank my fellow Basildon Councilors and John Baron, our local MP for standing shoulder to shoulder with me. Also, Teresa May, the Home Secretary who so kindly provided us with thousand of Extras, the Riot Police equipped with tazer guns and visually stunning Riot gears, no expense was spared with this Cat Lady as far as sending out riot police is concerned. Without her sending us these fabulous Extras, we would not have the ability to create such dramatic settings for the footages that are now viewed by millions around the world. These footages are not just there providing the entertainment, with wowing factor, they are also truly educational, for instant, people in China can now see with their own eyes how a mature democracy like Britain treat its minorities, This was democracy in action, much better than the boring Prime Ministerâ€™s question time in the House of Commons. I am sure there was no comparison as far as the viewing rating war was concerned, we win hands down every time.

I would like also to thank Eric Pickles and Len Gridley for their ingenious comic talents that provided numerous hilarious moments, timed to the perfection.

Finally, I would also like to take this opportunity to thank my mum, my dad and most of all, I must not forget to thank God, I would like to thank God for not making me born into a travelers family or indeed into a Jewish family when Adolf Hitler was still around. I must say that I am grateful to God that I was born a white English boy, without Godâ€™s hand, this achievement at Dale Farm may have never happened.

I always knew since I was a little boy that one day I would be famous. I am very glad that now my name will be remembered like many other famous people. A very big thank you for those who invested in me and believed in me. This award is for all of you too.