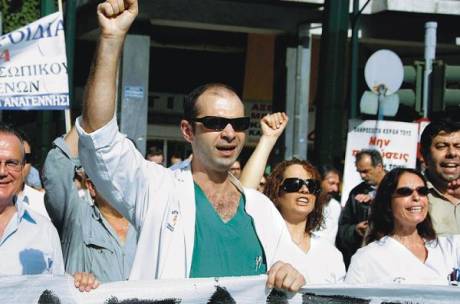 The misery of poverty and pain of austerity measures being undertaken in Greece though unprecedented in Europe, has happened in Africa, Asia and Latin America for centuries and in many countries on those continents continues to suffer its effects.

However the resistance to the troika has brought about not only fierce resistance but innovative forms of social organisation. TheÂ occupation of a hospitalÂ in Greece by health workers who have placed it under workers control, is a significant step forward. As rather than being helpless victims of the economic crisis, democracy is being born anew in Greek workers taking control of their own destiny by refusing to comply with the authority of auserity.

It has now been 10 days since the initial occupation and they have issued a new statement regarding the occupation. Below is theÂ following statement has been made by the health workersÂ occupying the hospital.

Hello all,
Thank you so much for your interest and support.
The occupation of ourÂ hospital in Kilkis by its workersÂ started on Monday, February 20th, 8:30 local time.

This occupation is not only about us, the physicians and the workers at the Kilkis Hospital. Neither is it only about the Greek National Health System, which is collapsing, indeed. We are in this fight because what is in real danger now is the human rights and our lives. And this threat is not against just a nation, or against a few countries, or a few social groups, but against the low and middle classes in Europe, America, Asia, Africa, in the whole world.

Todayâ€™s Greece, is tomorrowâ€™s picture of Portugal, Spain, Italy and the rest of the countries worldwide.

The workers at the Kilkis Hospital and at most of the hospitals and health centers in Greece are not paid on time and some of them see their salaries being cut down to practically zero. A fellow-worker of mine was transferred to our cardiological clinic almost in shock, when he realized that instead of receiving the usual check of 800 euros (yes, that is his monthly salary) from the state, he received a note saying that not only he will be paid nothing for this month, but he is also has the obligation to return 170 euros! Other workers were paid only 9 (nine) or 4 euros and even less for this month! Those of us who still receive some kind of a salary will support them in any way we can.

This is a war against the people, against the whole community. Those who say that the public debt of Greece is the debt of the Greek people are lying. It is not the peopleâ€™s debt. It was created by the governments in collaboration with the bankers in order to enslave people.

They create the debts themselves (with the help of corrupt governments and politicians) for their own benefit. They gave Greece a banker as prime minister to ensure that the â€œjobâ€ will be done properly. Our Prime Minister Loukas Papadimos was not elected at all. He was appointed by the ECB and the bankers with the help of European and Greek corrupt politicians. This is their interpretation of the term â€œdemocracyâ€!

The debts are created by bankers who create money out of thin air and collect interest, just because our governments gave them the right to do so. And they keep saying that for those debts it is you and me and our children and grandchildren that will have to pay with our personal and national assets, with our lives. We do not owe them anything. On the contrary, they owe the people a great part of the fortunes they made thanks to the political corruption.

If we do not open our eyes to this truth, we will soon all become slaves, working for 200 or less a month. That is those of us who will be able to find a job!
No medical care, no pensions, homeless and starving, as now is the case with my fellow citizens in Greece. Thousands of them live outdoors and starve.

We have no intention to paint the reality with dark colors, but this is the truth. This situation is not due to a financial or monetary accident or mistake. It is the start of the ugly phase of a long process following a carefully designed plan, a process that has started decades ago! We have to fight together against this neoliberal plan. And this is what we, in Kilkis and in so many cities around the world, do now.

For the time being, we are not considering the opening of a donations account. We might, however need to do this in a few months or even weeks, if the situation might be worse. What we currently need most of all is moral support and publicity. Local struggles all around the world have to spread and gain massive support if we are to win the war against the corrupt system. If you can think of any additional ways to spread our news and ideas, it would be great!
Again, we canâ€™t thank you enough for your kind thoughts and words. This solidarity of yours has a great meaning to us.

You can contact us at the following mail address:
enosi.kilkis@yahoo.gr

Yours
Leta Zotaki,
Director of the radiological department, of Kilkis Hospital
Member of the workers general assembly,
President of E.N.I.K. (Union of the Doctors of Greek National Health Care System in Kilkis)


An update on the Greek hospital still under workers' control: http://t.co/eKXT5byu (via @justinthelibsoc)