25,000 Kenyan health workers are sacked for going on strike 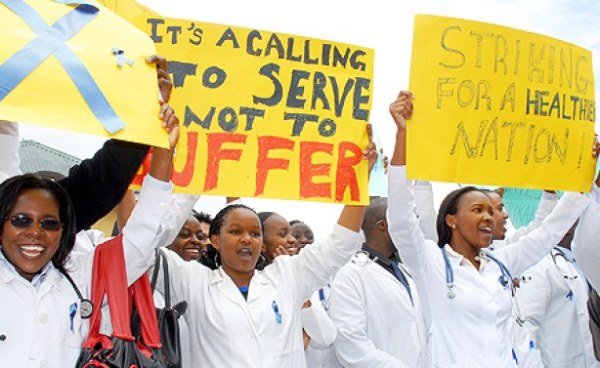 Â Twenty five thousand Kenyan nurses and associated health workers are continuing to resist, despite being sacked by the government for rejecting a union-brokered ‘offer’.
The strike began ten days ago, when workers belonging to various unions stopped work. According to the Kenyan Sunday Nation:

“Administrators of public hospitals across the country, including referral centres, sent away patients after nurses, clinical officers mortuary attendants and paramedical staff boycotted work and held peaceful protests demanding that the government meets their demands.”

The government immediately reacted with slander, declaring that they were “dealing with crooks”, who were after more money than they were entitled to. The dispute centres on allowance schemes, which allow the workers to claim for uniforms, being on call, and other expenses.

After just three days, the union reached a deal with the government, which was immediately dismissed as a “betrayal” by the rank and filers, who pressed on with their strike action. However, the end of the week saw the government sack all 25,000 who had withdrawn their labour. Despite this, “hundreds” of their number rallied in the capital Nairobi on Friday, demanding reinstatement.

At the start of the strike, assistant medical services minister Kazungu Kambi claimed he had thirty thousand applicants waiting in the wings to replace the strikers. The sheer convenience of this number makes it highly dubious, and of course any aspiring strikebreakers would have to be trained up first. Nevertheless, the road ahead looks like a tough one for the health workers. In the coming days and weeks, they will need to set up a united and democratic organisational structures independent of the trade unions, and make an appeal to the wider working class. This struggle looks like one to keep an eye on.


25,000 Kenyan health workers are sacked for going on strike http://t.co/XwjkF3ti by @neon_black81


25,000 Kenyan health workers are sacked for going on strike | The Multicultural Politic http://t.co/QCUsZzg3